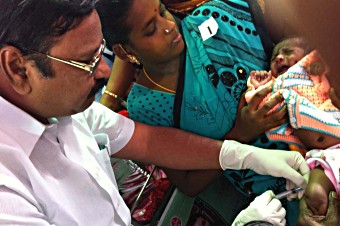 I landed at 4.30 am in Trivandrum, Kerala State, and I could hardly contain my excitement. We have been working with India’s Ministry of Health and Family Welfare for the past two years after they were approved by the GAVI Board for pentavalent vaccine introduction; and finally it’s happening, with Kerala and Tamil Nadu, two states with high immunisation coverage, taking the lead.

At the Women and Children’s Hospital, Thycaud, Trivandrum, the media were out in force to report on the first launch of pentavalent vaccine in the public sector in India.

Speaking in Malayalam, The Minister of State of Health told the crowd of 150 why the state was introducing pentavalent vaccine. He said they had put together a group of experts and determined they could further reduce by half their relatively low infant mortality of 16 per 1000 live births by 2015.

I said a few words on behalf of GAVI, expressing our support for Kerala’s achievement. The first baby was vaccinated and by the end of the first day about 6,000 infants had been vaccinated. The target is 530,000 infants for the year.

The Director of Immunisation of an adjacent district I visited asked “Where do you come from?”, “Ghana,” I responded. “Have you introduced Penta in your country?”, “Yes, we introduced in 2002”. “You mean you introduced almost 10 years ago!?”. This was followed by a reflective silence.

On my traffic jammed way back to Trivandrum, I reflected about my experiences of seeing countries introduce new vaccines -- the excitement, the involvement of politicians and other key stakeholders and how the profile of the immunisation programme has increased after the doldrums of the post-Universal Childhood Immunisation years. We still have a long way to go in improving the programme.

My next stop is Tamil Nadu.

After arriving in Chennai, I called Dr Jameela , the state director of health services in Kerala, to thank her for the warm reception. She told me about the upsetting news of an adverse event following the previous day’s immunisation. Together with the state government, our partners from WHO and UNICEF immediately started investigating.

The venue for the launch of pentavalent vaccine in Tamil Nadu is the Alamelrangapuram Primary Health Care centre in Vellore.

We met a bigger crowd; twice the size of Trivandrum, the dais was decorated with flowers and had big banners to mark the occasion. The state was organising a double launch for pentavalent and a campaign against smoking. I met the PHC director and her staff who showed me round the centre. The mothers with their babies to be vaccinated were seated and wore their numbered badges. It was clear which baby was to be vaccinated first. A very orderly arrangement! 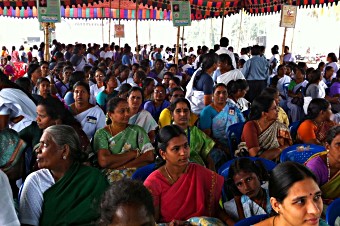 The press with their cameras were also there in numbers. I was introduced to WHO and UNICEF staff and also met Dr Jacob John, the former chair of the National Technical Advisory Group on Immunisation (NTAGI). He was clearly excited about the introduction of pentavalent vaccine into the public health system after it has been used in private clinics for some eight years.

Finally, an hour and a half later, the launch had gone smoothly, all the babies have been vaccinated.

Mission accomplished. Pentavalent vaccine is finally launched in the public sector in India.

At a point in time it looked like it wasn’t going to happen this year, but the GAVI Alliance has “country-driven” as one of our core principles and India determined when it was ready to introduce and informed us. All I did was rely on my colleagues in India to make it happen. And they did. Additional states have indicated their interest to introduce penta in the near future.

Thanks to all who made this possible.