Measles jab saves over 20 million young lives in 15 years, but hundreds of children still die of the disease every day 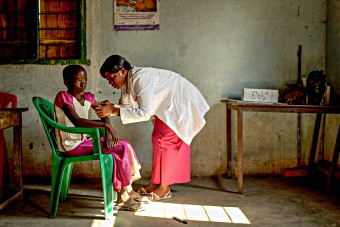 New York/Atlanta/Geneva, 10 November 2016 – Despite a 79 per cent worldwide decrease in measles deaths between 2000 and 2015, nearly 400 children still die from the disease every day, leading health organisations said in a report released today.

“Making measles history is not mission impossible,” said Robin Nandy, UNICEF Immunisation Chief. “We have the tools and the knowledge to do it; what we lack is the political will to reach every single child, no matter how far. Without this commitment, children will continue to die from a disease that is easy and cheap to prevent.”

Mass measles vaccination campaigns and a global increase in routine measles vaccination coverage saved an estimated 20.3 million young lives between 2000 and 2015, according to UNICEF, the World Health Organization (WHO), Gavi, the Vaccine Alliance, and the Centers for Disease Control and Prevention (CDC).

Measles is a key indicator of the strength of a country’s immunisation systems and, all too often, it ends up being the canary in the coalmine with outbreaks acting as the first warning of deeper problems.

But progress has been uneven. In 2015, about 20 million infants missed their measles shots and an estimated 134,000 children died from the disease. The Democratic Republic of the Congo, Ethiopia, India, Indonesia, Nigeria and Pakistan account for half of the unvaccinated infants and 75 per cent of the measles deaths.

“It is not acceptable that millions of children miss their vaccines every year. We have a safe and highly effective vaccine to stop the spread of measles and save lives,” said Dr. Jean-Marie Okwo-Bele, Director of WHO’s Department of Immunization, Vaccines and Biologicals. “This year, the Region of the Americas was declared free of measles – proof that elimination is possible. Now, we must stop measles in the rest of the world. It starts with vaccination.”

“Measles is a key indicator of the strength of a country’s immunisation systems and, all too often, it ends up being the canary in the coalmine with outbreaks acting as the first warning of deeper problems,” said Dr. Seth Berkley, CEO of Gavi, the Vaccine Alliance. “To address one of the world’s most deadly vaccine-preventable childhood killers we need strong commitments from countries and partners to boost routine immunisation coverage and to strengthen surveillance systems.”

Measles, a highly contagious viral disease that spreads through direct contact and through the air, is one of the leading causes of death among young children globally. It can be prevented with two doses of a safe and effective vaccine.

Measles outbreaks in numerous countries – caused by gaps in routine immunisation and in mass vaccination campaigns – continue to be a serious challenge. In 2015, large outbreaks were reported in Egypt, Ethiopia, Germany, Kyrgyzstan and Mongolia. The outbreaks in Germany and Mongolia affected older persons, highlighting the need to vaccinate adolescents and young adults who have no protection against measles.

Measles also tends to flare up in countries in conflict or humanitarian emergencies due to the challenges of vaccinating every child. Last year, outbreaks were reported in Nigeria, Somalia and South Sudan.

Measles elimination in four of six WHO regions is the global target at the midpoint of the Global Vaccine Action Plan implementation. “The world has missed this target, but we can achieve measles elimination as we have seen in the Region of the Americas,” said Dr. Rebecca Martin, director of CDC’s Center for Global Health. “As the African adage goes, 'it takes a village to raise a child’ and it takes the same local and global villages to protect children against measles. We can eliminate measles from countries and everyone needs to play a role. This year’s report shows that the 2015 WHO regional measles elimination goals were not met because not every child has been reached – gaps exist. We need to close these gaps, ensure that commitments for adequate human and financial resources are kept and used well to reach every child, detect and respond to every case of measles, and prevent further spread. These efforts will protect all children so that they can become the next generation of leaders. This will also ensure that every country has a strong safety net to stop disease threats where they occur and protect the world from global health threats.”