Millions of children set to be protected against typhoid fever 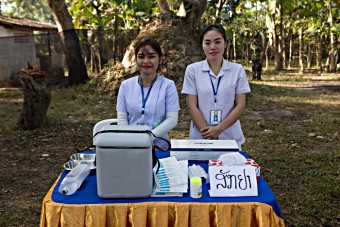 An immunisation session for the Hmong community at Nasala Village during a visit by the Gavi Board.
Credit: Gavi/2017/Amanda Mustard.

Vientiane, 30 November 2017 – Millions of children in the poorest countries could soon be protected against typhoid fever following the Gavi Board’s approval today of a support window for typhoid conjugate vaccines (TCVs).

“Typhoid fever imposes a dramatic burden on children in the poorest nations affecting countries, communities and families,” said Dr Ngozi Okonjo-Iweala, Gavi Board Chair. “This disease has long been eliminated from most industrialised nations, but it is still a serious threat in developing countries where the vast majority of deaths occur,” she said. “I lost my cousin and nearly lost my son because of typhoid. This vaccine will be a lifesaver for millions of children, especially those living without access to clean water or sanitation.”

A serious enteric fever caused by ingesting contaminated food or water, typhoid fever killed more than 128,000 people in 2016 and affected nearly 12 million, according to the latest estimates. Improved living conditions and the use of appropriate antibiotics have resulted in the virtual elimination of the disease in industrialised nations and a dramatic global reduction in the proportion of deaths.

However, this progress is now in danger of being undermined because of the growing problem of antimicrobial resistance (AMR). Drug-resistant typhoid is spreading across Asia and Africa, posing a serious threat to public health.

“This vaccine is safe, effective and can provide lasting protection,” said Dr Seth Berkley, CEO of Gavi, the Vaccine Alliance. “The growing spread of drug resistant strains of typhoid is a major threat, not just to individuals but also to our efforts to control the disease, and requires us to prioritise prevention strategies. Strong coverage through routine immunisation together with efforts to improve access to clean water and hygiene will play a key role in dramatically reducing the disease.”

A new typhoid conjugate vaccine manufactured by Bharat Biotech International Limited and first licensed in India in 2013, is currently under review for prequalification by the World Health Organization (WHO).

This follows the recent recommendation by the WHO Strategic Advisory Group of Experts on Immunization (SAGE) that typhoid conjugate vaccines should be introduced in endemic countries to all children over six months of age. Vaccines from five additional manufacturers are also under development and are expected to be available between 2018 and 2022.

Gavi expects the first countries to apply in 2018 with introductions forecasted to begin the year after. The Gavi Board also noted that the use of this new vaccine will enable further studies on the impact of the disease, challenges with diagnosis and appropriate immunisation strategies.

Typhoid conjugate vaccines were first seen as a priority by the Gavi Board in the 2008 Vaccine Investment Strategy (VIS) although no financial commitment was made at that time in the absence of a suitable vaccine.

The Vaccine Investment Strategy is Gavi’s evidence-based process for assessing the suitability of new vaccines to further support countries. Developed every five years, the next VIS will be completed at the end of 2018.

Today, the Gavi Board approved the evaluation criteria that will be used for assessing potential new investments in vaccines and other immunisation products for endemic disease prevention.

ENGAGEMENT WITH TRANSITIONING COUNTRIES AND POST-TRANSITION

Between 2016 and 2020, at least 20 Gavi-supported countries are expected to transition out of Gavi’s financial support. Most of these countries are on-track to fully finance their immunisation programmes and sustain the progress they have made since 2000, when Gavi was created. However, the Gavi Board recognised that a small number of countries are facing more significant challenges.

“Sustainability is at the heart of the Gavi model,” said Dr Berkley. “Our transition approach is an unprecedented attempt to systematically support countries with growing economies to take full ownership of their immunisation programmes. The Alliance will work closely with governments to ensure that they remain on track, so that children are not left unprotected against deadly diseases.”

The Gavi Board agreed to allow countries to apply for new vaccine support at any point during their transition. It decided that the Alliance should continue to engage with countries after they transition to track progress and continue to advocate for immunisation.

The Board also made available US$30 million through 2020 for the Alliance to provide targeted technical support to address specific challenges in countries after transition.

“I want to strongly commend the spirit of this Board meeting,” said Dr Ngozi Okonjo-Iweala. “All partners have come together to take this important step towards Gavi’s vision and support countries to develop sustainable health systems and economies, thanks to immunisation.”

At the Board’s request, Gavi will also assess whether tailored post-transition support is needed in Angola, the Congo Republic, and Timor-Leste. The Board emphasised that governments will need to demonstrate clear commitment to ensure the sustainability and full domestic financing of immunisation programmes.

Finally, as part of Gavi’s flexible approach with countries facing fragility or emergencies, the Gavi Board decided that South Sudan will continue to receive Gavi support despite not fulfilling its co-financing obligations in 2016.