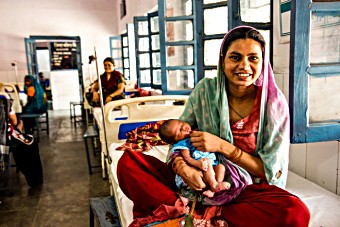 A mother and child during the 2014 pentavalent scale-up in Jaipur and Rajasthan. Among other positive trends in the latest coverage figures, India's DTP3 coverage rates for 2013 were revised up from earlier estimates, from 72% to 83%.
Credit: Gavi/2014/Oscar Seykens.

Geneva, 17 July 2015 – The overall immunisation coverage rate in the 73 countries Gavi works with has never been higher, meaning that more children than ever before in the world’s poorest countries are being vaccinated against potentially fatal diseases.

New figures released by the World Health Organization show that the overall coverage rate for children receiving all three doses of a vaccine that protects against diphtheria, tetanus and pertussis (DTP3) in the 73 countries supported by Gavi stood at 81% in 2014.

This represents an increase of one percentage point from 2013 and 21 percentage points since 2000, the year Gavi was formed. In human terms this means that every year tens of million more children are receiving a DTP3 containing vaccine compared to the turn of the century.

However, coverage differences between some countries remain alarmingly high. While some large countries have made remarkable progress, others have seen declines in coverage which needs to be addressed urgently to ensure children are not left at risk of serious childhood illnesses. Despite the positive overall trend, today’s figures also underline the importance of Gavi’s decision to focus a large part of its 2016-2020 strategy on increasing coverage and equity.

The decreases highlight the importance of understanding coverage disparities between countries but also at sub-national and community levels. Gavi’s increased focus on increasing coverage and equity in the 2016-2020 period will see an increased focus on countries whose DTP3 coverage rate remains stubbornly low and additional tailored support will be offered to help drive improvements.

Gavi is already helping the three countries to rebuild their routine immunisation systems. Gavi support for the country-led plans includes provision for civil society organisations to work with communities to hold meetings, briefing village chiefs and religious leaders on the importance of immunising children. It will also ensure that there are enough trained health workers to provide the vaccines to the children.

Although DTP3 is the international barometer for vaccine coverage, substantial gains have been made following the introduction of newer vaccines against major diseases. In 2014, 28% of children in Gavi-supported countries received the pneumococcal vaccine, which protects against the leading causes of pneumonia. This is an increase of 9 percentage points since 2013 and the trend is expected to continue as more countries introduce the vaccines.

Coverage for rotavirus vaccine more than doubled between 2013 and 2014 and now stands at 15%. More than 30 Gavi-supported countries have introduced the vaccine since Gavi first offered support in 2006 but many countries with a high severe diarrhoea burden are still to apply for funding to introduce the vaccine.