Gavi has earmarked US$ 85 million to fund the introduction of the vaccine in the world’s poorest countries.

Geneva, 3 April 2018 – Governments across Africa and Asia can apply for funding to protect children against typhoid fever. Gavi, the Vaccine Alliance will support eligible countries to introduce the new typhoid conjugate vaccine into their routine immunisation schedules.

“The typhoid conjugate vaccine will not only save lives, but also bolster the fight against anti-microbial drug-resistance,” said Dr Seth Berkley CEO of Gavi, the Vaccine Alliance. “Expanding vaccine coverage will play an important role in reducing illnesses and deaths from typhoid. Gavi is looking forward to working with countries to support the introduction of this safe and effective vaccine.”

The WHO announced the prequalification of the first typhoid conjugate vaccine (TCV), Typbar-TCV, in December 2017. Earlier that month the Gavi Board approved US$ 85 million for 2019-2020 to support its introduction in developing countries. The first introductions are expected to take place in 2019.

In October 2017, WHO’s Strategic Advisory Group of Experts on Immunization (SAGE) re-emphasised the importance of the use of typhoid vaccines in tackling the increase in anti-microbial resistance in low- and middle-income countries, as well as for the control of endemic typhoid. 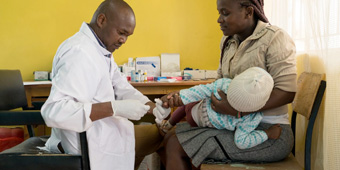 Taking on typhoid: a researcher’s view on the new vaccine

Following the World Health's Organization's recommendation of the new typhoid conjugate vaccine for high-burden countries, Dr Sam Kariuki of the Kenya Medical Research Institute, reflects on what this vaccine could mean for people around the world.

The WHO released on the 30th of March a revised typhoid position paper to include the new conjugate vaccine. The paper advises that the new vaccine can be administered to children as young as six months old and provides longer-lasting immunity than previously available vaccines. With approximately 30% of the typhoid burden occurring in children under five years of age, this vaccine could greatly impact disease burden. The fact that it is suitable for young children also means it can be easily incorporated into routine vaccination schedules.

The Typhoid Vaccine Acceleration Consortium (TyVAC), which is a partnership between University of Maryland School of Medicine, University of Oxford and PATH, is currently conducting clinical trials of the prequalified vaccine in Malawi, Nepal, and Bangladesh with a focus to further evaluate vaccine efficacy and impact of TCV in reducing typhoid burden in endemic countries.

The disease has been virtually eliminated in industrialised nations, but typhoid still kills more than 140,000 people annually in developing countries. With the alarming spread of drug-resistant typhoid across Africa and Asia, this number could continue to rise.