Two month-old Mohammed Ali has just had his first rotavirus vaccine dose. His mother is delighted he will be protected against the leading cause of severe infant diarrhoea.

Dr. Walyeldin Elfakey looks around the crowded and chaotic diarrhoea ward at the Omdurman Paediatric Hospital in Khartoum, the capital of Sudan. It is filled with sick and fragile-looking children, almost all of them under the age of three, with their worried mothers.

Some of the beds accommodate two or even three patients, so crowded is the ward.

Many of the children are attached to intravenous drips that replace the essential fluids they have lost as a result of severe diarrhoea.

Although diarrhoea is one of the most serious child health problems in Sudan, he is looking forward to a time very soon when this ward will be far less crowded.

In July, Sudan became the first GAVI-eligible country in Africa to introduce a new vaccine to protect children from rotavirus, the leading cause of severe infant diarrhoea.

“The introduction of the vaccine will reduce the suffering and deaths of our children,” says Dr. Elfakey.

He looks around the ward, “All of these children were admitted within the last 24 hours. Some children died before they made it here.  Some have developed malnutrition. Some are receiving IV fluids and oral rehydration. The introduction of rotavirus vaccine will reduce all this suffering.”

Mobile vaccination teams travel across the country to reach even the most remote populations. With vaccination card and register in hand, this mobile team leader explains the vaccination schedule to villagers in a district to the west of Khartoum.

The Ministry of Health in Sudan had been preparing for the introduction of rotavirus vaccines for two years.

This has involved increasing the capacity of the cold chain for vaccine storage, training health workers in how to prepare and administer the vaccines, modifying vaccination cards and registers, and informing parents when and why they should bring their babies for the vaccine.

They have done a good job. The introduction of the vaccine went smoothly and parents are excited about bringing their babies to receive it.

From the vaccination clinics at the largest urban hospitals to nomadic settlements in the desert reached by mobile vaccination teams, parents are eager to have their babies protected against one of the leading causes of child death in the country. 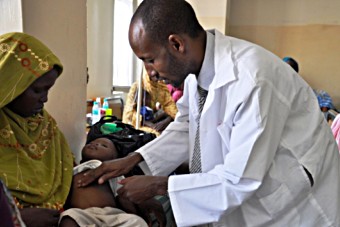 Dr. Walyeldin Elfakey examines a severely dehydrated boy at the gastroenteritis ward at the Omdourman Paediatric Hosptial in Khartoum.

At the Samir Health Centre in Khartoum, Nagla Salih Aziz cuddles her 2 month-old baby boy, Mohammed Ali, who has just been vaccinated against rotavirus.

Nagla almost lost her first child to diarrhoea; he was saved only after intravenous rehydration in hospital.

“I feel a great sense of security that my new baby has had this rotavirus vaccine,” she says.

“I know he could still get diarrhoea, but I know the risk of severe diarrhoea and dehydration is much lower now.”

Vaccination technician Hayad Adam Mohammed has been busy all afternoon giving babies the new rotavirus vaccine at the Sharwani health center in Khartoum.

She is tired, but obviously pleased with the work she is doing.

“The feeling is indescribable,” she says, “we are so happy about this vaccine. I only wish it could have been introduced a long time ago because we have lost so many children, including in my own family, to acute diarrhoea.”

Over 500,000 children under five die every year from rotavirus infections, with half of those deaths occuring in Africa.