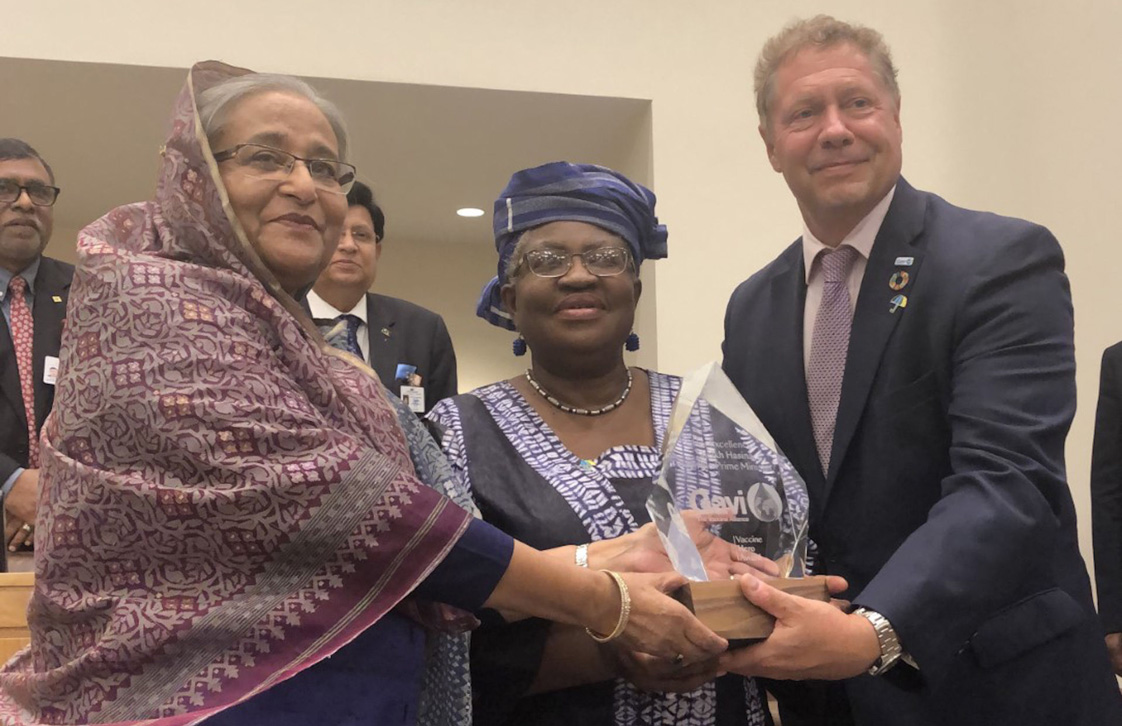 New York, 23 September 2019 – Her Excellency Sheikh Hasina Wazed, the Prime Minister of the Republic of Bangladesh, has been given the second ever Vaccine Hero Award by Gavi, the Vaccine Alliance.

The Vaccine Hero Award celebrates global figures whose dedication to the Vaccine Alliance’s mission has played a key role in helping Gavi and its partners to protect hundreds of millions of children across the world.

“Sheikh Hasina is a true champion of immunisation,” said Dr Seth Berkley, CEO of Gavi, the Vaccine Alliance. “Under her leadership Bangladesh has made tremendous strides in immunisation and child health. From her hands-on approach at home – personally launching every major immunisation campaign – to her consistent championing of immunisation on the global stage, Prime Minister Hasina is unequivocally a vaccine hero. Gavi’s successes would not be possible without partnerships with leaders like her.”

“I am honoured to receive the ‘Vaccine Hero’ award on behalf of Bangladesh and all the frontline health workers of my country,” said Her Excellency Sheikh Hasina. “Ensuring health and nutrition to all has always been a commitment to our people. We want to take the country to a stage which would be able to ensure basic health care and sufficient nutrition for all. Immunization has been the greatest public health success story in Bangladesh and I want to thank the Vaccine Alliance and other partners for their continued support and contributions.”

Since becoming Prime Minister in 1996, Sheikh Hasina has prioritised immunisation, health service delivery, education and the empowerment of women as critical drivers of socioeconomic development. From televised addresses promoting vaccination each National Immunisation Day to updating Bangladesh’s National Immunization Policy to ensure a focus on equity and social justice in immunisation, she has been instrumental in helping Bangladesh introduce new vaccines and maintain basic immunisation coverage at an impressive 97%.

Since 2001 Gavi has partnered with Bangladesh to provide over US$ 650 million for the introduction and rollout of routine vaccines as well as strengthening of the country’s health system. 80% of this amount has funded new vaccines including pentavalent, measles and measles-rubella (MR), inactivated poliovirus (IPV), and pneumococcal conjugate (PCV) vaccines. With Gavi support, Bangladesh has immunised 38 million children since 2003, including 2.8 million in 2018 alone.

In 2009 the Alliance presented Bangladesh with an award recognising its progress in immunisation and in 2010, Bangladesh reached the target laid out in United Nations Millennium Development Goal 4 – reducing under-five mortality by two-thirds. As an active participant in initiatives around health information management, biometrics, and unique digital identities for health, Bangladesh is now at the forefront of Gavi’s partnerships for innovation in immunisation.

The award was presented at a dedicated side event at the United Nations General Assembly high-level meeting on universal health coverage held in New York City. The UN General Assembly is an opportunity for Gavi and its partners to engage with world leaders and others on the cross-cutting role immunisation plays in achieving the Sustainable Development Goals, and to share valuable lessons learned from Gavi’s collaborative partnership model and innovative financing approach.