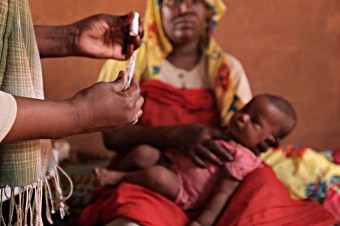 At Baruka village, 40 km outside Khartoum, Howa Hasa Al Rasul watches as a doctor prepares to administer the vaccine that will help protect her daughter Fatima Adil from a disease that causes 40% of all severe diarrhoea cases in Sudan. Source: Ryan Youngblood/GAVI/2011.

25 October 2011 – According to the latest rotavirus mortality estimates published today in the Lancet Infectious Diseases, rotavirus still takes the lives of 453,000 children each year, more than 1,200 every day.

These new figures highlight the heavy death toll caused by rotavirus-related diarrhoea among children under five. Ninety five percent of these deaths occur in developing countries, where limited access to treatment makes children most vulnerable to this killer disease.

The support GAVI Alliance offers for rotavirus vaccines brings hope to countries where the most deaths occur. The affordable and financially sustainable introduction of rotavirus vaccines in national immunisation programmes are expected to have a dramatic impact on global mortality due to rotavirus diarrhoea.

In September 2011, GAVI approved rotavirus vaccine funding for 16 more countries, including two of the 10 countries with the greatest number of rotavirus deaths worldwide: Angola and Ethiopia. These two countries will soon begin to reverse this tragic outcome with the introduction of rotavirus vaccines. By 2015, GAVI plans to support the introduction of this life-saving vaccine in some 40 countries, many of them in Africa, where the death toll from rotavirus infections is extremely high.

Swift and significant declines in hospitalisation and deaths due to rotavirus and all-cause diarrhoea have been observed in many of the 30 countries that have introduced rotavirus vaccines into their national immunisation programmes. For example, In Mexico, diarrhoeal deaths in children five years of age and younger plummeted by 46% during 2007-2009, in the three years following vaccine introduction (1).