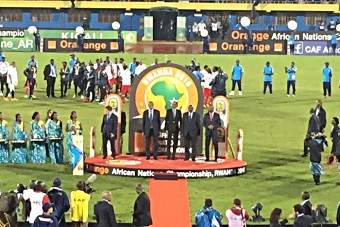 Over the coming months, Africa United will draw on the talents of the Confederation of African Football (CAF), the African Union, Gavi, the World Bank Group and the CDC Foundation, as well international health bodies, private companies and celebrities to tackle one of Africa’s biggest public health goals: to deliver life-saving vaccines to every child.

While 18 African countries reach 90 percent or more of under-fives with the basic package of childhood vaccines - diphtheria, tetanus and pertussis – the rest of the continent has low immunisation rates.  Five of the six countries in the world with immunisation coverage rates of less than 50% are African, including Equatorial Guinea, hosts of the 2015 African Cup of Nations.

Addressing a packed stadium during the half-time interval of the final between DR Congo and Mali, Dr Berkley said: “In football, one shot can make all the difference between winning and losing a match. In life, one vaccine shot can determine whether a child lives or dies. Every child counts so let’s make sure every vaccine shot counts.”

"Standing here today among thousands of football fans, I am greatly encouraged by the support of Africa's political and sporting leaders in pursuit of universal immunisation,” he added, “Football captures the attention of millions of people across this great continent. Now we are all members of the same team as we strive to ensure that every vaccine shot counts."

President of the Republic of Rwanda Paul Kagame

Gavi’s CEO was joined on the pitch by fellow Africa United supporters President of the Republic of Rwanda Paul Kagame and CAF President Issa Hayatou.

“I call on every African leader to join us in the fight against preventable child death and to join in the fight for universal access to immunisation,” said President Kagame.

The Africa United partnership was originally set up to leverage sport to catalyse action against the Ebola epidemic.

CAF President Hayatou said: “At CAF, we are committed to using the power of football to make sure that our players, future players, and most importantly, our fans, lead healthy lives. We are so excited to announce our partnership with the African Union and with Gavi through Africa United’s ‘Every Shot Counts’ campaign.  Together, we will support efforts to immunise millions of children in Africa by 2020.”