Tanzania to protect 21 million children against measles and rubella 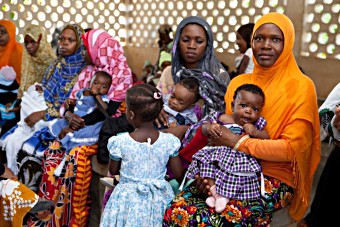 Geneva, 17 October 2014 – Tanzania will tomorrow begin protecting 21 million children against measles and rubella as part of a nationwide immunisation campaign supported by Gavi, the Vaccine Alliance.

All children aged between nine months and 14 years old will be able to receive the vaccine through an initial catch up campaign taking place over the next seven days. Once the campaign has been completed Tanzania will transition away from using a single-antigen measles vaccine in its routine programme and replace it with the combined measles-rubella vaccine.

“Children across Tanzania will benefit from protection against these two potentially deadly diseases,” said Gavi CEO, Dr Seth Berkley. “Our aim is to help countries reach more than 600 million boys and girls with the measles-rubella vaccine through Gavi-supported campaigns and routine immunisation by 2020, reducing the number of deaths from measles but also the devastating disabilities caused by rubella.”

Measles is a highly contagious disease which is often fatal. Global efforts have seen large decreases in the number of deaths from measles over the past decade, but the disease still claimed more than 120,000 lives in 2012, the equivalent of 14 deaths every hour. Rubella, while less frequently fatal, can be transmitted from mother to child during pregnancy, leading to foetal deaths, severe birth defects and disabilities.

Volunteers from Gavi Matching Fund partner Lions Club International are working with the Tanzanian government and other in-country partners, including UNICEF and the World Health Organization (WHO), to raise awareness of the campaign and support health workers with community outreach. This includes targeted activities such as working alongside vaccinators and sharing relevant information materials with parents and caregivers.

“Lions are committed to the fight against measles and rubella in Tanzania and around the world,” said Lions Clubs International Foundation Chairperson Barry Palmer. “We’re raising funds. We’re actively supporting campaigns in communities impacted by the diseases. And we’re looking forward to accomplishing more through our partnership with Gavi.”

Gavi’s support builds on the efforts of the Measles & Rubella Initiative (M&RI) and commitment from governments that have helped to dramatically reduce global measles deaths worldwide by 78%, from an estimated 562,000 in 2000 to 122,000 in 2012.