Why I am a Red Nose Day supporter 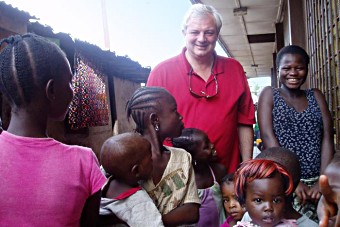 I firmly believe that it is in the British character to try to help those whose lives are blighted by disease, poverty and violence. Red Nose Day, supported by Comic Relief, gives millions of people across the country the opportunity to do just that.

This Friday night we will all be reminded of the desperate situations that persist in many countries around the world. The support that Comic Relief is able to provide to scores of organisations working in the most difficult of circumstances really does make a difference.

Like everyone, I am keen to know that the money raised by Comic Relief will be well-spent on tackling extreme poverty. Thanks to my work as the Prime Minister’s Envoy to the Sahel region, and previously as a Minister for International Development, I am in the privileged position of being able to see the impact funding from Comic Relief has on millions of children.

Access to vaccines is a critical issue in developing countries. Healthy children lead to healthy and self-sufficient societies but in many places a simple injection or some oral drops that will prevent children from succumbing to potentially fatal diseases are simply not available or, if they are, they are too expensive for most families.

Thankfully in the UK our children are vaccinated as a matter of course but the situation in many developing countries could not be more different. That’s why I’m an avid, unapologetic supporter of the work of the GAVI Alliance, funded by, amongst others, the UK Government and Comic Relief.

In all my experience in Sub-Saharan Africa, my current and former roles include helping tackle humanitarian challenges at their root – including access to immunisation – that are facing the people in countries such as Chad, Eritrea, Mali, Burkina Faso, Mauritania, Niger, Senegal, South Sudan and Sudan.

These are among the poorest countries on earth, and yet each is a contributing partner of the GAVI Alliance. GAVI is a public-private partnership which aims to increase access to lifesaving vaccines – both old and new – for children in the world’s poorest countries. This is not charity. GAVI is clear that countries must help finance their vaccine programmes through a co-payment arrangement.

Working with other partners such as Comic Relief, GAVI has helped immunise 370 million children in more than 70 countries since 2000, saving more than 5.5 million lives. This includes children in Tanzania, a country with a special resonance for me as it was where I was born.

GAVI is making progress but there is still a great deal to do. Every year, 1.7 million children die from vaccine-preventable diseases. The vast majority of these deaths occur in developing countries, where one out of every five children remains unvaccinated.

Comic Relief is playing its part by supporting the GAVI Matching Fund which sees a donation matched by the Bill & Melinda Gates Foundation. This funding pays for lifesaving vaccines – one of the most cost-effective health investments around.

Consider Tanzania, a country of 46 million people that has a plan to transform itself into a middle-income economy by 2025.

To succeed, the government recognised it must ensure good health for its people. By working closely with GAVI and its partners, Tanzania has increased its routine vaccine coverage rates to above 90%, while co-financing about 10 % of the cost of the vaccines. In parallel, the country’s GDP growth has risen to about £16 billion from £6.8 billion in 2001.

Immunisation should be a right for all children, no matter where they live and GAVI, through its work with Comic Relief and the UK Government, is helping to turn that basic right into a reality.

Rt Hon Stephen O’Brien, MP, is the Prime Minister’s Envoy and Special Representative to the Sahel, a part of Africa just south of the Sahara. He previously served as Parliamentary Under-Secretary of State for International Development from May 2010 to September 2012. He chaired the global charity, Malaria Consortium and is about to resume his trusteeship of the Liverpool School of Tropical Medicine. He is the Conservative MP for Eddisbury.