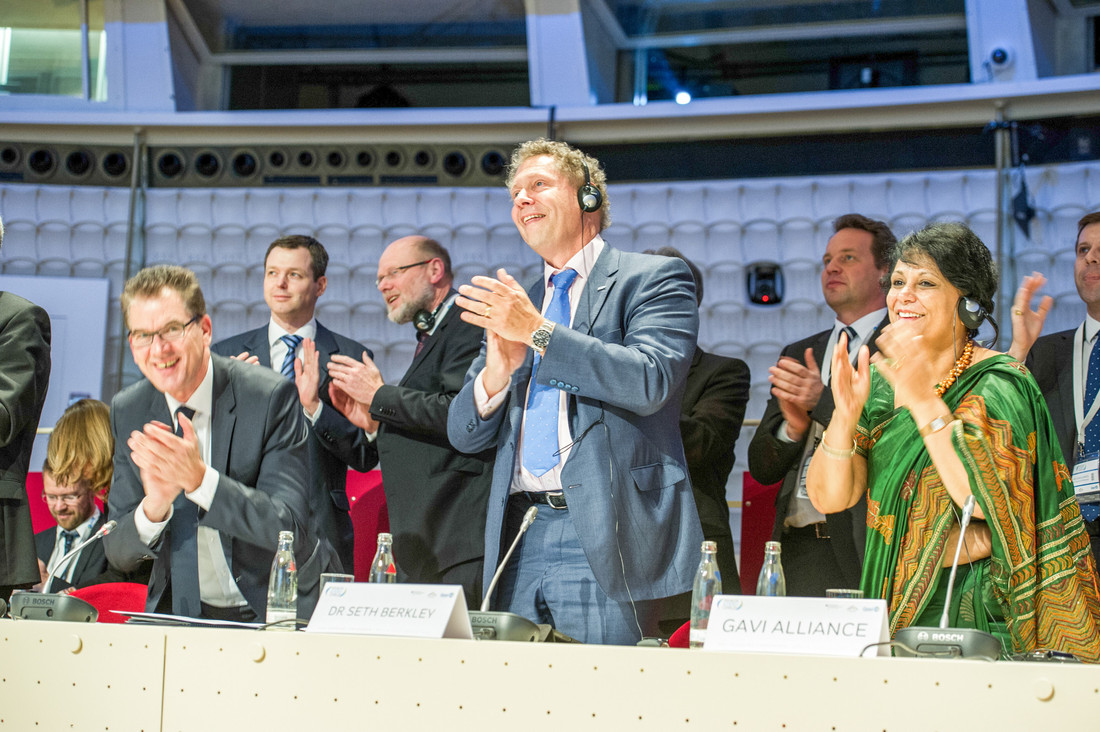 Support puts Gavi, the Vaccine Alliance on the path to immunise a further 300 million children and save up to 6 million more lives

Berlin, 27 January 2015 – Hundreds of millions of children living in the world’s poorest countries will receive life-saving vaccines as a result of record-breaking financial commitments made today at the Gavi Pledging Conference, hosted in Berlin by German Federal Chancellor Angela Merkel.

The new pledges, totalling US$ 7.5 billion, will enable countries to immunise an additional 300 million children, leading to 5 to 6 million premature deaths being averted and economic benefits of between US$ 80 and US$ 100 billion for developing countries through productivity gains and savings in treatment and transportation costs and caretaker wages.

Chancellor Merkel was joined in Berlin by H.E. Dr Jakaya Mrisho Kikwete, President of the United Republic of Tanzania, and H.E. Mr Ibrahim Boubacar Keïta, President of the Republic of Mali, Erna Solberg, Prime Minister of Norway, Donald Kaberuka, President of the African Development Bank, Bill Gates, Co-Chair of the Bill & Melinda Gates Foundation, ministers from more than 20 implementing and donor countries, civil society groups, CEOs of vaccine manufacturing companies, UN agencies and others who came together to secure commitments to fully fund Gavi-supported immunisation programmes in developing countries between 2016 and 2020.

In her statement at the conference, the first event of Germany’s G7 presidency, Chancellor Merkel said: “There is a long way still to go but today’s conference is an important milestone in the work of Gavi for the next few years to come. Please let us not fail, let us not lose courage but continue to put all our efforts into this wonderful work and thank all of those who are committed to this goal.”

“Today is a great day for children in the world’s poorest countries who will now receive the life-saving vaccines they need,” said Bill Gates. “We believe in the next 15 years, poor people’s lives will improve faster than any other period in history and that access to vaccines provided by Gavi are critical to making that happen.”

The Gavi Pledging Conference, which was opened by Germany’s Federal Minister of Economic Cooperation and Development, Gerd Müller, saw unprecedented engagement from donors, with many deciding to double or even triple their commitments to support Gavi in what will be its highest period of financial need.

Additionally, China, Oman, Qatar and Saudi Arabia made pledges to Gavi for the first time. China’s pledge means that all BRICS countries are now making financial contributions towards childhood immunisation through Gavi.

Developing countries are also increasing their financial contributions towards immunisation. Between 2016 and 2020, Gavi forecasts that implementing countries will allocate a combined total of around US$ 1.2 billion, which is additional to the funding provided by donors, towards their Gavi-supported programmes through the Alliance’s co-financing policy. This country ownership is vital to increasing the long-term sustainability of vaccine programmes.

“Thanks to the joint commitments of developing countries, development partners, vaccine manufacturers and others, Tanzania is making great strides in protecting its children through immunisation,” said President Kikwete of Tanzania. “The health and wellbeing of our children should always be our highest priority and in the future Tanzania will be able to fully support its own immunisation programmes. Until that time I am pleased that the Gavi partners continue to recognise the importance of the work to improve immunisation around the world.”

“We are pleased to be working with Gavi to ensure our children – including those living in the most remote and inaccessible areas – are protected with modern, effective vaccines,” said President Keïta. “Thanks to today’s historic pledges, children in Mali and around the world will have the opportunity to enjoy a healthy future through the power of immunisation.”

Ahead of the conference, vaccine manufacturers committed to maintaining affordable vaccine prices, a move that will not only help Gavi buy more doses with the money secured but also increase the sustainability of vaccine programmes. Countries whose economic status means they are no longer eligible for Gavi support will still have access to many vaccines at the same price Gavi pays for a number of years.

“Thanks to our donors, Gavi will be able to support developing countries to protect the lives of hundreds of millions of children,” said Dagfinn Høybråten, Chair of the Gavi Board. “We believe that vaccines should reach every child because this is one of the most effective ways of reducing preventable deaths in the poorest countries. The commitments made today will ensure Gavi can make a telling contribution towards the global community’s goal of ending extreme poverty by 2030.” 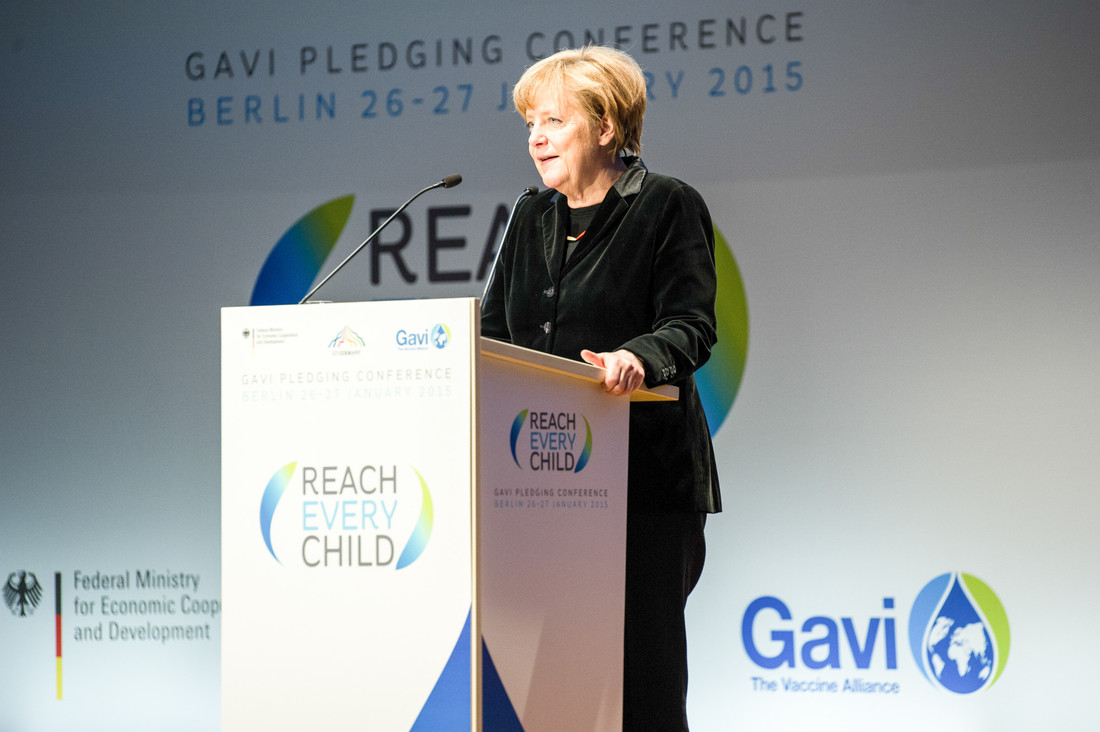 The US$ 7.5 billion raised today comes from a mix of pledges from 17 sovereign donors – for the first time almost all donors have made pledges for the full five-year funding period – the European Commission and private sector partners. Of the support from sovereign donors, US$ 252 million was committed to the International Finance Facility for Immunisation (IFFIm).

Additionally, Gavi announced today that the Gavi Matching Fund, a fund that doubles private sector contributions and impact, will be renewed for the 2016-2020 period with the support of the Bill & Melinda Gates Foundation, the Netherlands and other sponsors.

The US$ 7.5 billion pledged for Gavi’s replenishment will be combined with US$ 2 billion in already assured resources, including nearly US$ 1.2 billion from IFFIm, for the 2016-2020 period to enable Gavi to meet the US$ 9.5 billion cost of funding vaccine programmes in developing countries over the five year period.

The overall value of pledges for 2016-2020 is expressed in US dollars by valuing pledges in other currencies at their US dollar equivalents based on the forecast rates published by Bloomberg. These pledges will be received in annual installments over these years. The exchange rate used for each currency is the average of the forecast rates published by Bloomberg on 23 January 2015 for the years 2016-2019.