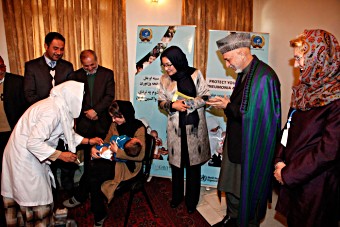 As part of the Government of Afghanistan’s ongoing efforts to improve the health of its children, life-saving pneumococcal conjugate vaccine (PCV) will be given to all infants under one year of age. The children will be protected against pneumococcal disease, the leading cause of pneumonia, which accounts for 25% of deaths in children under five years of age in Afghanistan.

With the support of the GAVI Alliance and its partners WHO and UNICEF, Afghanistan’s Ministry of Public Health will begin introducing PCV into routine immunisation programmes and the vaccine will be available for free at all health facilities across the country.

"Afghanistan is taking a big step towards securing a healthier future for its children," said Dr Seth Berkley, CEO of the GAVI Alliance. "The addition of pneumococcal vaccine to the childhood immunisation package will help protect the lives of the children who represent the country's future."

GAVI has received strong support from partners in the Middle East for its work with Afghanistan.

In January 2011, His Highness Sheikh Mohamed Bin Zayed Al Nahyan, Crown Prince of Abu Dhabi, partnered with the Bill & Melinda Gates Foundation to support immunisation programmes in Pakistan and Afghanistan. Of the US$ 100 million pledged (US$ 50 million each), GAVI received US$ 66 million to introduce the pentavalent1 and pneumococcal vaccines in Afghanistan with the aim of reducing child mortality in the country.

“In Afghanistan, a country which is of particular interest to the UAE because of its proximity and its perilous humanitarian and development situation, it is gratifying to note that the UAE contribution has enabled the vaccination of millions of children with both the 5-in-1 pentavalent and pneumococcal vaccines,” said Her Excellency Sheikha Lubna bint Khalid Al Qasimi, Minister of International Cooperation and Development, United Arab Emirates.

GAVI has also received financial contributions from a public campaign launched by Majid Al Futtaim (MAF) Finance2 during the holy month of Ramadan. During the campaign throughout the UAE, MAF Finance committed to donating 1% of all Najm credit card transactions over AED 2,000 to support GAVI’s mission of increasing access to immunisation in the world’s poorest countries. The campaign raised AED 460,000 (US$ 125,000), clearly demonstrating the generosity of the UAE public towards supporting children in need. This support will help GAVI to immunise an estimated 5,000 children.