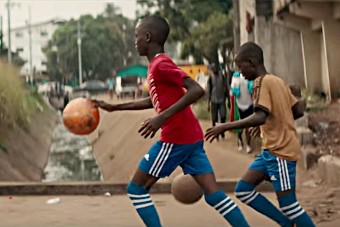 Libreville, Gabon, 27 January 2017 – Football stars Anthony Laffor, Geofrey Massa and Denis Onyango are starring in a series of new adverts that will run throughout the 2017 Total Africa Cup of Nations urging parents to vaccinate their children against life-threatening diseases.

The television, radio and print ads will highlight the Every Shot Counts vaccination campaign launched in 2016 by Africa United – a joint platform that leverages sport to catalyse action on health, led by the Confédération Africaine de Football (CAF) and the African Union. Partners include the World Health Organization (WHO) AFRO, CDC Foundation, Gavi, the Vaccine Alliance, PATH, Special Olympics International, Lions Clubs International Foundation and the World Bank Group.

Together, the Africa United team is raising awareness of the role of vaccines in fighting preventable diseases and the need to achieve universal immunisation coverage across Africa. Africa United is the official social cause of the 2017 TotalTM Africa Cup of Nations (AFCON) tournament.

“We know that football unites people from all across Africa and beyond,” said Issa Hayatou, President of CAF. “CAF is committed to using the power of football to ensure our players, future players, and most importantly, our fans, lead healthy lives. By supporting ‘Every Shot Counts,’ together we can help ensure millions of African children are immunised by 2020.”

In using the power of football to promote immunisation, this campaign is not only saving lives, but also ensuring a brighter future for Africa.

Vaccination saves between two and three million lives every year. However, one in five African children still do not have access to basic life-saving vaccines. Vaccine-preventable diseases remain the most common cause of childhood mortality across the continent.

“Immunisation helps ensure that all individuals start out on an equal playing field in terms of their health,” said Dr Matshidiso Moeti, WHO Regional Director for Africa. “Every eligible individual should be immunised with all appropriate vaccines. We are grateful to CAF for their leadership in leveraging the power of sport to bring life-saving messages about the value of vaccines to countries and communities across Africa.”

“Africa’s children are Africa’s future,” said Dr Seth Berkley, CEO of Gavi. “If every child receives the vaccines they need, they will be better protected against deadly diseases and can grow up to be healthy and productive adults, making vaccination one of the most cost-effective investments in history. In using the power of football to promote immunisation, this campaign is not only saving lives, but also ensuring a brighter future for Africa.”

“The ‘Every Shot Counts’ campaign provides us with an unparalleled platform to reach audiences with life-savings messages to better protect the health of Africa’s children,” said Chloe Tonney, Chief Innovation and Strategy Officer, CDC Foundation.

The new Africa United adverts, reinforcing the importance of child vaccination, are airing in-stadia during the 2017 AFCON tournament and throughout Africa on TV and radio, including by Africa United partner, SuperSport, and can be viewed on Africa United’s website.