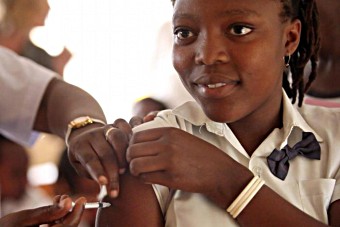 Geneva, 4 February 2013 – More than 180,000 girls in eight developing countries are set to receive protection against the leading cause of cervical cancer thanks to human papillomavirus (HPV) vaccines funded by the GAVI Alliance.

The demonstration programmes will give each country the opportunity to test their ability to put in place the systems that would be needed to roll out the HPV vaccines nationally and to inform their decisions. Unlike most other vaccines, which are administered to children under the age of five, HPV vaccines are given to girls aged nine to 13.

“Introducing the HPV vaccine in developing countries is the start of a global effort to protect all girls against cervical cancer,” said Dr Seth Berkley, GAVI CEO. “Of the 275,000 women who die of cervical cancer annually, 85% live in the world’s poorest countries. Cervical cancer is one of the leading cancer killers of women in the developing world.”

By 2015, GAVI plans to support more than 20 countries to vaccinate approximately one million girls with HPV vaccines through pilot projects. By 2020, more than 30 million girls are expected to have been vaccinated in over 40 countries with GAVI support.

Seven of the eight selected countries will begin introducing HPV vaccines this year targeting girls aged 9 to 13, mainly through schools but also community health programmes to reach girls who do not go to school. Ghana, Kenya and Sierra Leone are likely to be the first to begin administering HPV vaccinations in early 2013 with Tanzania planning to start next year.

GAVI-eligible countries which already have systems in place for national rollouts targeting adolescent girls can apply for funding without undertaking demonstration projects.

In some countries cervical cancer now kills as many women as childbirth, claiming a life every two minutes. Without changes in prevention and control, cervical cancer deaths are expected to increase to 430,000 each year by 2030, virtually all in developing countries. Immunising girls before sexual initiation – and before exposure to HPV infection – is a key strategy to preventing cervical cancer. Vaccination against HPV is only effective before the person is infected with the virus.

"It is imperative that young women and girls be protected against cervical cancer, the leading cause of cancer deaths in women in our region," said Hon. Catherine Gotani Hara, Minister of Health of Malawi. "Given that most women in Africa often lack access to screening and treatment services, the HPV vaccine is our best hope at protecting girls against this deadly disease. We applaud GAVI's commitment to make the HPV vaccine more accessible and affordable to Malawi and other low-income countries."

Half a million doses

UNICEF, a key GAVI partner, will procure the vaccines following a competitive tender process that is currently being completed. Merck and GlaxoSmithKline (GSK) are currently the only two manufacturers who have prequalified HPV vaccines.

GAVI has been working with vaccine manufacturers to secure the most affordable price for HPV vaccines. To date, one manufacturer has announced an indicative price of US$ 5 per dose, a 64% reduction on the current lowest public price. GAVI expects to secure a lower price for procurement of HPV vaccines, vital to the sustainability of current and future programmes.

One of the challenges to effectively delivering HPV vaccines is that many developing countries do not offer routine health services for girls in the 9 to 13 age group. Other challenges include identifying the appropriate target group, engaging with those at highest risk who may not be easily reached, and preventing a sexually transmitted cancer-causing infection that is minimally symptomatic or asymptomatic.

The eight countries approved for GAVI support will “learn by doing” in order to make an informed decision on whether to expand their programmes nationwide and potentially build capacity to do so.
Initial experience in offering HPV vaccinations through schools in Africa, Asia and Latin America has been encouraging.

The introduction of HPV vaccines in developing countries also provides a window of opportunity to strengthen other adolescent health services, exploiting synergies with nutrition, HIV, sexual and reproductive health.

Professor Ian Frazer, creator of the HPV vaccine, welcomed GAVI’s announcement. “I am very pleased that GAVI is standing firm in its commitment,” he said. “Today’s announcement of country approvals for HPV pilot projects is another big step forward to ensuring that girls living in developing countries enjoy the same access to HPV vaccines as girls elsewhere in the world.”