Amid the rubble, clinic in Haiti protects 20,000 with vaccines

‘They are all my children,’ says one of four pioneers, all of whom remain devoted to clinic in Carrefour after 20 years

Port-au-Prince, Haiti, 27 April 2013 – Three dozen women, many of them cradling infants and small children, were squeezed into a small, dusty courtyard on Saturday in the Port-au-Prince neighbourhood of Carrefour.

The infrastructure there – home to 500,000 people – was nearly demolished by the 2010 earthquake, which turned an estimated 50% of Carrefour’s buildings into rubble, including the city hospital. Much of the area remains a mix of dilapidated structures, open sewers, tent shelters and open air markets.

On this day – the end of Vaccination Week in the Americas, when the government of Haiti announced the upcoming rollout of rotavirus vaccine through support of the GAVI Alliance – the temperature outside topped 32 degrees (90 F). But in the clinic courtyard below street level, babies were being vaccinated, under the shade of an overhang.

“They are all my children,” affirmed nurse Roseambert Maria Jose Fortuma. She co-founded the facility – officially called the Codec Multi-Functional Centre – 20 years ago to ensure that children in the desperately poor neighbourhood would be immunised. “Now, 20-year-olds that I vaccinated are coming with their own children,” she says. 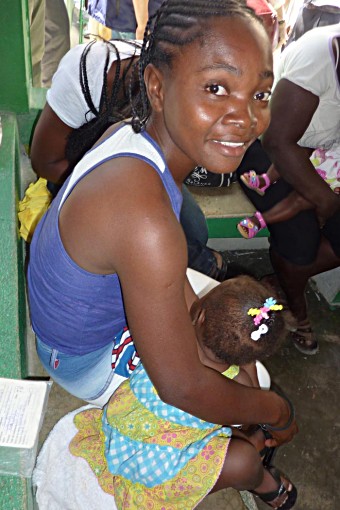 Madame Fortuna and the three other pioneers – vaccine manager Lareche Abed-Nego, Reverand Faveur Joseph and clergy Jean Ne’louis – have not strayed from this mission, offering free vaccination services Monday through Friday for young children – an estimated 20,000 who live in the neighbourhood.

In all, the clinic has one doctor, two nurses and two student health care workers, says Abed-Nego, adding that it is jointly run by the Haitian Ministry of Health and an non-governmental organisation (NGO). The clinic also receives support under the tripartite agreement on health among Cuba, Brazil and Haiti, which provide additional help.

Charts pinned to the wall of the anteroom indicate increasing numbers of children are being vaccinated with “penta 3” – actually, the pentavalent vaccine supplied by GAVI and rolled out by Haiti last year – measles and polio.

The clinic also provides nutrition supplements and medicine against malaria and other diseases, with stocks lined up in a back supply room. Many in the neighbourhood also come seeking treatment for HIV and tuberculosis, but the clinic is not equipped to treat them, Abed-Nego says.

Clinic emerges from the earthquake

“Vaccination takes priority,” he emphasises, adding that the Codec Multi-Functional Centre also has a mobile clinic. “It is important for the community. Many people died in the earthquake. The clinic reduced contagion.”

One of the remarkable things about this is that the clinic itself was destroyed in the earthquake, Abed-Nego says. But with the help of NGOs that arrived shortly afterward, it was rebuilt. In addition to the supply room, the reframed structure has a cold room with a small refrigerator operated by gas electricity and a consultation room. Narrow wooden beams hold up a pitched metal roof.

“Thanks to vaccination, the people in Carrefour can be free of sickness,” says Madame Fortuma. And thanks also go to her and Codec Multifunctional Centre’s other three pioneers.