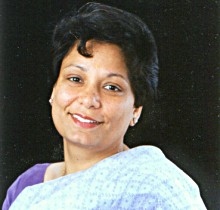 Geneva, 10 April 2014 - The GAVI Alliance is delighted to announce the appointment of Anuradha Gupta as its new Deputy CEO. With more than 30 years of experience in public health and public policy, Ms Gupta brings with her a wealth of management and leadership expertise, a proven track record of success and a passion for making a profound social impact.

Ms Gupta is currently responsible for managing the world’s largest public health program, with an annual budget equivalent to US$ 3.5 billion in her role as Additional Secretary, Ministry of Health and Family Welfare and Mission Director of the National Health Mission, Government of India. During this time she has played an integral role in India’s hugely successful polio eradication program, taking strategic decisions that helped secure a polio-free India – a feat once considered impossible by many observers.

Ms Gupta will join the GAVI Executive Office on 2nd June and will be based at the Alliance’s headquarters in Geneva.

“We very much welcome Anuradha, who joins us at a critical point in the GAVI Alliance mission,” said Dr Seth Berkley, CEO of the GAVI Alliance. “I am personally very excited to see Anuradha become part of our team, bringing her tremendous expertise, experience and passion.

“We are moving forward into a phase of massive expansion of GAVI-supported immunisation programmes so Anuradha’s extensive management experience and deep understanding of country-level immunisation challenges will prove invaluable. Additionally, with 20 countries expected to graduate away from GAVI support by 2020, Anuradha’s broad multi-sectorial expertise and proven ability to deliver results will help to steer the Alliance through this unprecedented transitional phase.”

“I am absolutely delighted to be joining the Alliance at this exciting time,” said Anuradha Gupta. “I see GAVI as a strong organisation powered by people with a determined spirit who are spurred by an insatiable faith in their mission to save lives. I very much look forward to becoming part of that mission.”

We very much welcome Anuradha, who joins us at a critical point in the GAVI Alliance mission.

In addition to her position within the Government of India, Ms Gupta was also co-chair of the Partnership for Maternal Neonatal & Child Health (PMNCH), and in 2012, at the invitation of then US Secretary of State, Hillary Clinton, was a member of the steering committee for the watershed ‘Child Survival: Call to Action’.

Ms Gupta holds an MBA from Wollongong University in Australia and has read Public Policy at Maxwell School in the United States. She has also received executive education at Stanford Business School and John F. Kennedy School, Harvard University.

Ms Gupta will succeed current GAVI Alliance Deputy CEO Helen Evans, who is retiring after a career that has also seen her hold key positions in the Australian Health Ministry and the Global Fund to Fight AIDS, Tuberculosis and Malaria. She joined the GAVI Alliance in 2009 and was interim CEO during the successful replenishment event in 2011 which saw donors commit US$ 7.4 billion towards Alliance immunisation programmes.

“Helen will be greatly missed by all connected with GAVI,” said Dr Berkley. “Her successful spell as interim CEO laid the foundations for the huge acceleration of vaccine introductions that we are able to support today. We are sad that she is retiring but we are pleased for her that she will be able to be closer geographically to her family for the first time in more than a decade.”