Ahead of Seth Berkley’s speech to the 2017 graduating class at Johns Hopkins University in Washington, DC on 23 June, Global Health published a two-part Q&A with the Gavi CEO. In this first article, Seth describes Gavi’s latest priorities, highlights the increased risk of epidemics starting in densely populated urban slums and emphasises the need to reach every child with all WHO-recommended vaccines.

Gavi CEO Seth Berkley administers the rotavirus vaccine to an infant during the dual launch alongside the pneumococcal vaccine in Tanzania. Credit: Gavi/2012/Sala Lewis.

Great strides in expanding vaccination coverage have been made in recent years. During 2015, about 86% of infants worldwide—116 million—received 3 doses of diphtheria-tetanus-pertussis (DTP3) vaccine, according to WHO. What’s the next frontier for expanding vaccine coverage?

The good news is that there’s been increased access. But, if you ask, how many people are receiving the 11 vaccines that WHO recommends for every child on Earth, the answer is much, much lower. It’s around 5%, maybe 10%. We don’t actually measure that number. So that is really the challenge.

Vaccines like pneumococcal vaccine and the rotavirus vaccine— in most countries, pneumonia or diarrhea is the largest killer—those vaccines aren’t included in that high level of coverage statistic because they came later. They’re lagging behind. So, the real challenge is to get the world to focus on full protection from immunization as the goal and then to make sure we get that level [of coverage] as high as it can be. But right now, that’s at quite a low level.

I think most people would assume that it’s just a problem of money: If there were enough money in the low- and middle-income countries to pay for these vaccines, then everything would be fine. But is that true?

It isn’t just a question of money. There are countries that have very low income and do very well. And there are countries that have much higher incomes that do very poorly. So, Rwanda, which is a very poor country, has extremely high coverage rates. Whereas Angola, which has an almost 10-fold higher gross national income, their DTP3-containing vaccine coverage by the last survey was around 40%. So, you’re seeing huge disparities that don’t relate to money.

Does it just come down to political will? 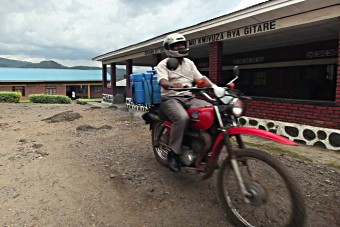 Angola spends 5% of their GNI on health, and Rwanda spends, I think the number’s 21%. Angola’s probably still spending a little bit more than Rwanda is, given it has 10 times the income, but then the challenge is where do they spend it? They’re not obviously prioritizing primary health care and vaccines. So those are some of the challenges that we have to make sure countries do.

Vaccines are the most cost-effective intervention. And so, if you were to logically put together a health program, the first thing you would do is roll out vaccines, as completely as you could. Because they prevent disease, they stop outbreaks, they bring primary health care to the rural areas. Obviously … you really want to make sure that your preventive services are quite well resourced.

What are Gavi’s major priorities for the next couple years?

We have added a particular focus now on coverage and equity. And why is that important? Well, it turns out there usually is a reason why a region has low coverage. In the past, it was because maybe they were geographically isolated … but often today, it’s because it’s a different religious group, or different ethnic group, or some stigma. The other thing we’re seeing a lot of is that people leave the rural areas to go to the city for work, or [because of] climate change, or for other reasons. We then see large numbers of under-immunized people who don’t have a normal residence.

What we can say [to countries] is, you can continue to do what you did before, you’re unlikely to get a different result. So, each country [can] then ask, where are we missing our kids? [And] do that analysis using the best data that they have, then put an intervention in [and] carefully measure what happens. If it looks like it’s working, do more of it. If it’s not working, then go back to the drawing board—a continuous loop to get us to improvement.

But having that large population in cities—it presents a great opportunity, right? Because you have a concentrated population, you don’t have the same access issues as in rural areas.

Well, yes and no. You’re right in a sense it’s easier to reach people and there are resources around. But there’s also greater risk for epidemics because you have a dense population. So, you have to worry about things operating at a much faster level if you have an outbreak of yellow fever or meningitis, or measles, occurring in a tightly, densely population.

The second challenge is that in a sense, it’s easier to track where people are in rural areas. It’s much harder to do that in an urban slum, where you have vast numbers of people and they’re moving around.

In a 2015 TED Talk, you said that if we want to prevent epidemics like Ebola, we need to take on the risk of investing in vaccine development and stockpile creation. Has the world embraced that challenge in the last couple years? And if not, why not?

Well first of all, a lot of progress, but it is early days. So, for example, Gavi has now evergreened all of our stockpiles. Cholera, yellow fever, meningitis A, multivalent meningitis—soon to be Ebola—these are things that we will continue to support over time, and we’ll make them available to whoever needs them. If you’re a Gavi country, you don’t pay. If you’re a non-Gavi country, you pay back for the vaccines when the outbreak is over. We’re trying to be fair, but the point is that there will be stockpiles there. We’re obviously looking at how big the vax stockpiles should be, and how to make sure we have incentives in place to ensure that the manufacturers make enough vaccines.

But the second part of it is that I called for, in that particular TED Talk, a new effort to try to create both platform technologies that could be used, but also potential epidemic vaccines that would be otherwise a market failure. And there now is a new organization called CEPI, which is the Coalition for Epidemic Preparedness Innovation.And that organization now is funded with around $600 million, and their goal is to take a list of vaccines that have come off the WHO urgent R&D priorities list, and to go ahead and make vaccines up to say, phase I, phase II—and then to be able to have those available if an outbreak was to occur. We’ll have to see how it plays out. But at least there is now an effort that is organized to do that.

Obviously, I’m a great fan, believer in public health. I think the technical skills one learns are critical, but I think there’s a whole other world, and I will call this activism, or advocates, for the principles of global health.

Where there isn’t trust, where people don’t necessarily believe facts, it has the potential to bring down all of the major advances we’ve had in public health over time. I think restoring trust by the citizens in these processes, and making sure that we are speaking out for the right things is critical in addition to doing a really good job at what we do whether that’s [conducting] outbreak investigations, or creating safer workplaces or better nutrition programs. We also have a role to play as bearers of public trust.

And considering vaccine hesitancy, could public health have done more to defend vaccines?

Absolutely. And this is where the activism and engagement, and advocacy, we need to really be continuing to push this.

So, you’ve been the CEO of Gavi for nearly six years. What’s kept you there?

A group of girls show their vaccination cards during a HPV vaccination session in Liberia. Credit: Gavi/2016/Duncan Graham-Rowe.

Well I think in a sense that if you’re a believer in public health, nothing has more reach than immunization. And the opportunity to bring this amazing tool to children around the world, and to influence adults, and stopping outbreaks, etc., is an amazing job.

Gavi, as an institution, is an extraordinary place because we are an alliance. So, we don’t build and duplicate what others are doing, instead we work with everybody. It makes it somewhat complicated sometimes to stitch things together, but it means our overhead rate is low. It means that we can focus on bringing innovation in. And because we’re not in the UN system, we’re not a straight public organization, we can work with all different types of players, and bring things that can really make a difference. So, it’s exciting. It has huge leverage, has a huge effect, and is truly global. And as I tell the staff all the time, there’s not many other jobs where you can say at the end of the year, well we saved millions of children, we immunized and had 200 million contacts with children last year—as a result of the work that we’re doing.

The article was first published in Global Health NOW a news website and free weekday e-newsletter of essential global health news and views. Global Health NOW is an initiative of the Johns Hopkins Bloomberg School of Public Health.