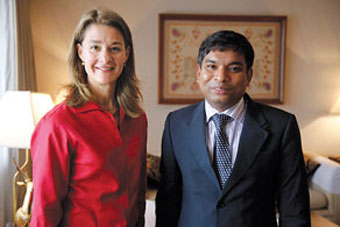 "Delivering lifesaving vaccines takes the dedication of many well-known players like GAVI, WHO and UNICEF; government officials; and perhaps most importantly hundreds of thousands of heroes on the frontline like Dr. Hossain," writes Gates.

"While it may seem like a small innovation, it shows how looking at old problems in new ways can make a profound difference," writes Gates.

The letter, which outlines key priorities for the Foundation in 2012, devotes extensive coverage to global health, polio, the fight against AIDS, improving the health of mothers & children through family planning and vaccines.

"When Melinda and I started this work more than a decade ago, we were inspired by the conviction that “all lives have equal value.” So one of the first things we invested in was vaccines, which protect all children who receive them, no matter how rich or poor they may be. In short, vaccines work," writes Gates.

Gates also references GAVI's June 2011 Pledging Conference, acknowleding donors' generosity in pledging the funds which will allow GAVI to support the introduction of pneumococcal and rotavirus vaccines throughout the developing world over the next five years. He predicts the relatively new vaccines will prevent 190,000 diarrhoeal deaths and 480,000 respiratory deaths by 2015.

"The money that has been pledged to GAVI will save 4 million lives by 2015. That’s why I think of June 13, 2011, the date of the pledging conference, as a historic day for global health equity," writes Gates.

"It was an emotional moment for Melinda and me. We were happy that our foundation played a role in helping the world reach that milestone. But what really moved us was the fact that so many partners share our vision of an equitable world and are willing to put money behind it, even in these tough times. When people know the kind of impact their generosity has, they are not only willing but eager to help."

Gates unveiled his letter in South London at a meeting with students at a high school, where he thanked its students and hundreds of others from around the globe for submitting their own letters. He went on to discuss its content with a gathering of international development students at the London School of Economics, hosted by the Global Poverty Project at the launch of their new UK global poverty ambassadors program.