Children in Bangladesh to benefit from dual vaccine introduction

More than three million children to be protected against polio and the leading cause of pneumonia (joint press release Gavi, UNICEF, WHO, GPEI) 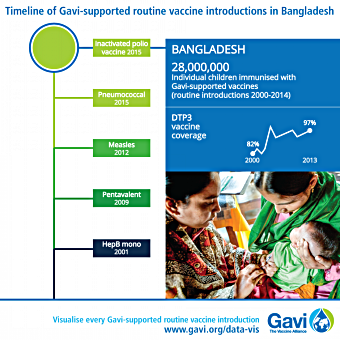 Geneva/Dhaka, 20 March 2015 – Two new life-saving vaccines are being introduced tomorrow into Bangladesh’s national immunisation programme thanks to support from Gavi, UNICEF, WHO and the Global Polio Eradication Initiative (GPEI) partners.

More than three million children will benefit from pneumococcal vaccine (PCV), which protects against one of the leading causes of pneumonia, and the Inactivated Polio Vaccine (IPV) as part of the Polio Eradication & Endgame Strategic Plan 2013-2018.

“Pneumonia is one of the leading causes of child mortality in Bangladesh, accounting for 22 %1 of deaths of children under the age of five so the introduction of pneumococcal vaccine will have a major positive impact on child survival,” said Dr Seth Berkley, CEO of Gavi, the Vaccine Alliance.

Globally, pneumococcal disease takes the lives of half a million children under the age of five each year, the vast majority of whom live in developing countries.

“We strongly believe that introduction of PCV and IPV in the national immunisation schedule will have a major impact on the reduction of under-five mortality and morbidities. Given the commitment and determination shown by the Government and partners, UNICEF is confident that this momentous effort will make a significant and sustained contribution to child survival in Bangladesh through ensuring equitable access to all children,” said Edouard Beigbeder, UNICEF Representative, Bangladesh.

Together with GPEI, Gavi is supporting an unprecedented push to introduce IPV into most countries by the end of 2015. Strong routine immunisation is an essential factor to interrupt and maintain zero polio transmission.

In May 2013, the World Health Assembly endorsed the Polio Eradication & Endgame Strategic Plan 2013-2018, calling on countries to strengthen routine immunisation programmes and introduce at least one dose of IPV as a lead up to the phased removal of oral polio vaccines.

Oral polio vaccine is widely used in developing countries and while it has successfully reduced polio cases by 99 per cent worldwide, adding IPV to routine immunisation programmes will further improve immunity and help reduce the risks associated with vaccine-derived polioviruses.

“The introduction of IPV as part of an accelerated roll-out is also critical as it will consolidate global efforts to put an end to this crippling and debilitating disease. Together with GPEI, Gavi is supporting an unprecedented push to introduce IPV into most countries by the end of 2015. Strong routine immunisation is an essential factor to interrupt and maintain zero polio transmission. As long as a child anywhere is infected with polio, children in all countries are at risk,” added Dr Berkley.

Last year more than 350 cases of wild polio virus were recorded, mostly in Pakistan, which along with Afghanistan and Nigeria is one of the three countries where polio is endemic. Since the beginning of 2015, 17 cases2 have been reported worldwide (16 in Pakistan and one in Afghanistan).