Campaign to reach 800,000 people with Gavi-supported vaccines in Grand’Anse and Sud. 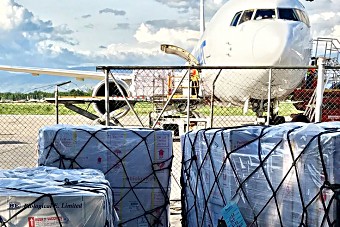 One million oral cholera vaccines have been flown into Haiti in the last week.
Credit:WHO/2016/Winnie Romeril

Over the past month cholera cases have risen in Grand’Anse and Sud, the two departments hit hardest by last month’s hurricane. UNICEF estimates that eighteen cholera treatment centres were damaged and that over 1,000 children are suspected of contracting the disease since 7 October.

Gavi, the Vaccine Alliance, has funded one million doses of oral cholera vaccine (OCV) to be used in the campaign.

The Haitian Ministry of Health, supported by WHO, UNICEF, the International Federation of the Red Cross (IFRC) and others will now launch a major campaign to reach 800,000 people over one year of age in Grand’Anse and Sud.

The vaccination campaign will take place alongside continued work to repair and improve water and sanitation infrastructure as well as health facilities in the two departments.

Gavi CEO Dr Seth Berkley said: “The race is on to stop this cholera outbreak wreaking further death and devastation in Haiti following Hurricane Matthew. These vaccines will play a vital role supporting the wider strategy to contain this disease, which rightly focuses on putting the right water, sanitation and hygiene infrastructure in place to provide a long-term solution to this problem.”

Dr Berkley argued in the Miami Herald last month that, while this vaccination campaign could help prevent an outbreak of the scale of the 2010 cholera epidemic, vaccine stockpiles cannot be a long-term solution. Instead the focus should be on preventing the root causes through investment in water, sanitation and hygiene infrastructure.

Since 2013, Haiti has conducted small-scale OCV campaigns on an annual basis, vaccinating approximately 480,000 people with vaccines sourced from the Gavi-supported global stockpile.