GAVI congratulates its Board Chair on his new appointment 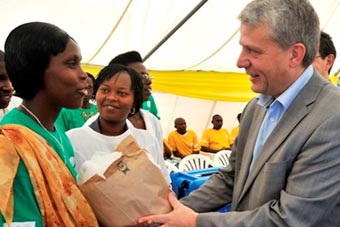 Geneva, 21 September 2012 - The GAVI Alliance wishes to congratulate its board chair, Dagfinn Høybråten, on his appointment as Secretary General of the Nordic Council of Ministers.

Through his work as board chair, Dagfinn Høybråten is playing a key role in GAVI’s mission to help vaccinate an additional 250 million children in the developing world by 2015.

Dagfinn Høybråten’s chairmanship of the GAVI board contributed to the unprecedented success of the 2011 GAVI pledging conference and he has earned a reputation as a highly effective leader in global health.

Subject to the GAVI Alliance Board's approval Dagfinn Høybråten will remain as the GAVI board chair, with the full support of new employers, when he starts his new role in 2013.

Seth Berkley, CEO of the GAVI Alliance, said: “Dagfinn Høybråten is a great asset to GAVI and I am confident that the Nordic Council of Ministers will benefit immensely from his international experience and expertise.”