First Ladies call on African Union to reach every child 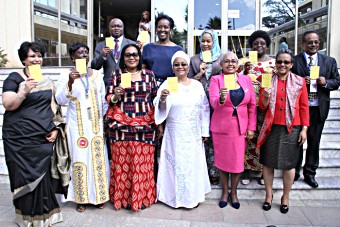 Addis Ababa, 31 January 2016 – The Organization of African First Ladies Against HIV/AIDS (OAFLA) has called upon all member states of the African Union to renew their efforts to reach every child with routine immunisation.

While 18 countries in Africa already reach 90% or more of children aged under-five with the basic package of childhood vaccines - diphtheria, tetanus and pertussis – most African countries have low immunisation rates. Of 19 million under-immunised children in the world, one quarter live in Africa.

During a high-level working lunch at OAFLA’s 16th General Assembly, the First Ladies highlighted the need for African countries to finish the unfinished business with children’s health.

From 24 to 25 February, a Ministerial Conference of Immunization under the leadership of WHO AFRO and EMRO will bring together African leaders – including health and finance ministers –in Addis Ababa.

The meeting will provide a powerful platform for governments across Africa to demonstrate their commitment to expanding access to vaccines and achieving the goals of the Global Vaccine Action Plan (GVAP) - 90% DTP3 vaccine coverage by 2020 and at least 80% vaccination coverage in every district or administrative unit.

Immunisation in Africa: did you know?