Eligible developing countries invited to apply for support to introduce human papillomavirus and combined measles-rubella vaccines. Hundreds of millions of women and children to be protected 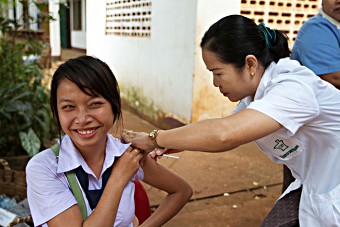 Geneva, 5 April 2012 - In a global effort to protect more women from cervical cancer and millions of children from a premature death or life-long disabilities, the GAVI Alliance will include human papillomavirus (HPV) and combined measles-rubella vaccines in its portfolio for the first time as it opens a new round of applications for support to the world’s poorest countries.

These new vaccines have been added to GAVI’s menu of childhood vaccines available for funding which includes the five-in-one pentavalent vaccine, yellow fever, meningitis A as well as pneumococcal and rotavirus vaccines which can help prevent the leading causes of pneumonia and diarrhoea – the two biggest killers of children in developing countries.

What GAVI was created to do

“Making it possible for children and women in developing countries to have the same access to these life-saving vaccines as their counterparts in richer nations is what GAVI was created to do,” said GAVI Alliance Board Chair Dagfinn Høybråten.

“By opening this new application round, we take another step towards our goal to avert close to four million future deaths by 2015 through immunisation. Ours is an investment that helps build healthy communities and accelerates development.”

“The new support we are now offering has huge potential impact for the health of millions of women and families in the developing world,” said GAVI CEO Dr Seth Berkley.

“The HPV vaccine in particular is critical to women and girls in poorer countries because they usually do not have access to screening to detect cervical cancer and treatment available in richer nations. We are aiming to correct this inequity and also accelerate the elimination of rubella and measles.”

Highly transmissible, HPV causes approximately 275,000 cervical cancer deaths each year, of which more than 85% occur in developing countries. Experts say this figure could increase to 430,000 by 2030 if action is not taken.

Safe and effective HPV vaccines may prevent 70% of cervical cancer cases. HPV also causes other, more rare, cancers in both men and women.

Up to a million girls and young women

If applicant countries can demonstrate their ability to reach girls with HPV vaccines and manufacturers can satisfy the GAVI Board’s requirements, up to a million girls and young women could be protected from cervical cancer by 2015 in a handful of countries. This will increase to more than 20 million in nearly 30 countries by the end of the decade.

Responding to projected demand and World Health Organization (WHO) recommendations, GAVI is also offering funding for vaccines against the rubella virus, which threatens pregnancies and children’s health.

Forecasted demand suggests that more than 700 million children could be reached by 2015 and one billion by 2020 through campaigns and routine immunisation.

GAVI will fund rubella vaccines through a combined measles-rubella (MR) shot, supporting the global effort to eliminate rubella as well as measles.

Some 90,000 babies are born with CRS each year in GAVI-eligible countries, equivalent to 80% of the global burden.

Since GAVI began introducing support for pneumococcal vaccines in December 2010, more than three million children have been immunised. Another 10 million are expected to receive the vaccine in 2012 helping protect them against the leading cause of pneumonia.

By the end of 2012, an estimated 4.8 million additional children will have received the rotavirus vaccine, protecting them from rotavirus diarrhoea, another leading cause of vaccine-preventable child mortality.