Donation of €1 million through Matching Fund marks fifth anniversary of partnership, including customer and employee support of GAVI programmes in Latin America 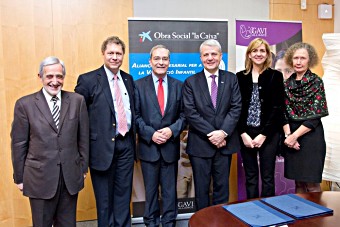 The gift marks the 5th anniversary of the formal partnership between GAVI and “la Caixa” and brings the total amount donated by the Spanish bank, its employees and business partners to more than € 17 million (about US$ 22 million), helping immunise more than 2.1 million children.

“It is a real honour for us to work with GAVI to improve the health of the most vulnerable populations and to break the vicious circle of illness and poverty in which they are trapped,” says Jaime Lanaspa, Executive Director of the “la Caixa” Foundation. “The partnership exemplifies our commitment to improving people’s quality of life.”

The donation – plus additional funds collected from “la Caixa” business partners and employees – is particularly impactful because it will be matched by the Bill & Melinda Gates Foundation under the GAVI Matching Fund, bringing the amount raised by “la Caixa” under that initiative to more than € 11 million (US$ 15 million), including the match.

In all, GAVI now has raised nearly US$ 88 million to date from nine partners through the GAVI Matching Fund, under which the Gates Foundation and the British Government have agreed to match contributions to GAVI from corporations, foundations, their customers, employees, business partners and members. The goal is to raise US$ 260 million for immunisation through 2015, and extend to GAVI significant private sector skills to help overcome roadblocks and provide visibility to the cause of immunisation.

“We are grateful to “la Caixa” for its strong, long-standing commitment to children’s health,” says Dagfinn Høybråten, board chair of the GAVI Alliance. “Their generous investments – including from their employees – and strong outreach to the Spanish business community are helping GAVI save children’s lives.”

Pneumococcal vaccine for Honduras and Nicaragua

The “la Caixa” pledge specifically goes toward the purchase of pneumococcal vaccine for Honduras and Nicaragua. The vaccine protects children against one of the leading causes of pneumonia – the number one killer of children under age 5.

In December 2010, Nicaragua became the first GAVI-eligible country to introduce pneumococcal vaccine into its routine immunisation programme, less than a year after it was introduced in rich countries. Today, 24 countries – including Honduras – have introduced this life-saving tool, and 50 have been approved.

By 2015, GAVI and its partners aim to immunise 90 million children with pneumococcal vaccines in more than 50 countries.

“La Caixa” has worked closely with GAVI since 2008, creating a unique private sector programme – the Business Alliance for Child Vaccination – under which its business partners have contributed about US$ 1.5 million to GAVI. To date, 224 Spanish companies have participated. “la Caixa” employees also have donated more than US$ 258,000 to GAVI.