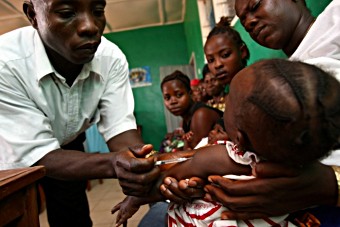 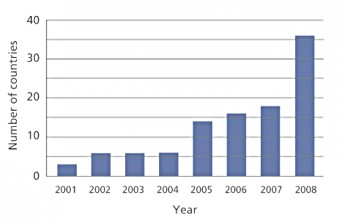 GAVI and its partners have played a key role in shaping the market conditions that have led to ever-growing demand for the pentavalent vaccine, which offers protection from diphtheria-tetanus-pertussis, Haemophilus influenzae type b (Hib) and hepatitis B (hepB).

By 2015, the Alliance aims to support the immunisation of an additional 230 million children with the five-in-one vaccine.

GAVI support for pentavalent has laid the foundations for the increased demand giving countries and manufacturers confidence to include pentavalent in their long-term plans.

In July 2004, the GAVI Board established the Hib Task Force to explore how the Alliance could best support countries to make evidence-based decisions on the introduction of the Hib vaccine - a core component of pentavalent.

On the recommendation of the Task Force, in 2005, the Board allocated a four-year US$ 37 million grant to set up the Hib Initiative to catalyse the vaccine's uptake.

By bringing together the knowledge and expertise of the Johns Hopkins Bloomberg School of Public Health, the London School of Hygiene & Tropical Medicine, and the Centers for Disease Control and Prevention (CDC), the Hib Initiative has used a combination of collecting and disseminating existing data, research and advocacy to help countries build a case for adopting the Hib vaccine.

In 2010, close to 28 million children were immunised with pentavalent vaccine with GAVI support

At the same time, GAVI's subsidisation of pentavalent for countries interested in introducing vaccines against Hib and hepB has encouraged manufacturers to invest in developing new versions of the conjugate vaccine - a trend which is expected to further reduce vaccine prices and increase the long-term sustainability.

It is no coincidence that the number of WHO prequalified pentavalent vaccines has risen since 2005 - the year when both developing countries and manufacturers were reassured that GAVI's initial five-year life cycle would be extended.

The International Finance Facility for Immunisation (IFFIm) injected US$ 181 million into buying or securing the supply of pentavalent vaccine in 2006-2007 through GAVI. The long-term predictability and large-scale nature of GAVI support gives countries and manufacturers confidence to include pentavalent in their long-term plans.

The growth in predictable demand supported by GAVI funding has created the sustainable market required to attract manufacturers, create competition and lower prices.

More on this topic

From the Gavi site

Despite the advantages of the 5-in-1 pentavalent vaccine, political will to drive widespread roll-out was lacking 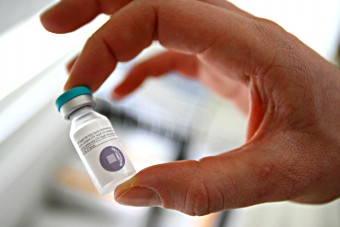 With immunisation against DTP, hepB and Hib requiring just three shots of pentavalent rather than the usual nine (three each of the DTP, hepB and Hib vaccines), the conjugate vaccine offers several advantages:

However, when pentavalent first became available in the late 1990s, demand in developing countries remained low for two reasons:

First, the Hib part of the vaccine was delivered in powder not liquid format, requiring staff in immunisation clinics to mix it with the DTP-hepB liquid component. This meant it was more complex and costly to deliver and transport. With only one supplier on the market and no GAVI support available, this early version of pentavalent was too expensive for developing countries.

Second, poor disease surveillance systems and inadequate hospital laboratories failed to detect Hib disease leading to a poor understanding of the burden of disease and epidemiology, both within developing countries and donor communities. As a result, the political will necessary to fund and drive widespread roll out of the vaccine was lacking.

Although Haemophilus influenzae type b (Hib) diseases and hepatitis B (hepB) infections are preventable with one combined life-saving vaccine, both continue to pose risks to the world's most vulnerable populations, leading to life-long disabilities or even death.

The Hib bacterium causes meningitis and pneumonia and is considered the third vaccine-preventable cause of death in children aged under five. It is estimated that there are three million cases of serious Hib infection annually, of which 400,000 result in childhood death. The majority of survivors suffer paralysis, deafness, mental retardation and learning disabilities.

Babies and young children are most at risk from hepB, a viral disease, which attacks the liver and can cause both acute and chronic disease. This can lead to chronic liver disease and puts victims at high risk of death from cirrhosis of the liver and liver cancer in later life.

More than two billion people are infected by hepB worldwide of whom 360 million suffer from chronic hepB infection; the latter is highly prevalent in all countries that GAVI supports.

Children are most vulnerable to infection with 90 percent of infants infected in the first months of their lives developing chronic hepB infection. Infections in the developing world are mostly from mother to child, or from child to child, mainly through cuts, bites, scrapes and scratches.

Vaccinating against Hib and hepB represents an essential step towards reaching Millennium Development Goal 4, which is to reduce the under-five mortality rate by two thirds by 2015.