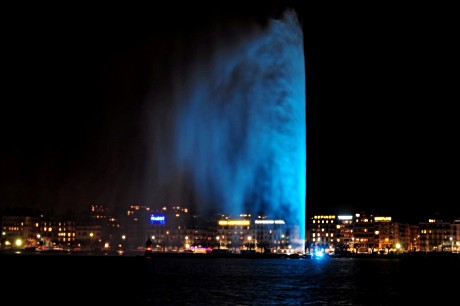 Geneva is joining cities and towns around the world in marking the second World Pneumonia Day, organised to highlight the fact that more than 1.5 million children under five die every year from pneumonia, making it the world's leading killer of young children.

The first events took place in Seoul, South Korea, attracting crowds and media despite competition from the last day of the G20 meeting. Events followed in other Asian countries, including the Philippines and India, and later in Africa and the United States.

Millions of children's lives could be saved with vaccines against the leading causes of pneumonia and treatment with antibiotics. 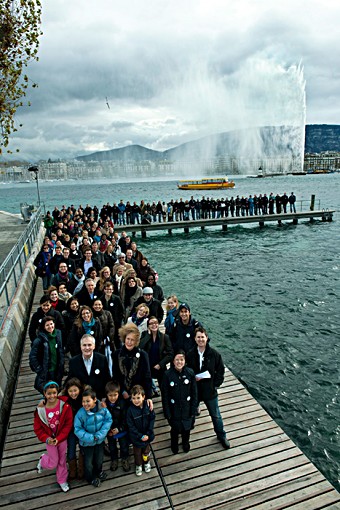 In Geneva, some 130 staff members from international organisations, bankers, school children, local citizens and a couple of passing tourists - all wearing blue jeans - gathered for a group photograph in front of the Jet d'Eau to mark the day.

The event was organised by the GAVI Alliance, a founder member of the Global Coalition against Child Pneumonia, which was formed to raise awareness about pneumonia and to encourage governments to support pneumonia prevention and treatment.

"Every 20 seconds, a child dies of pneumonia - and more than 98 per cent of those deaths are in the developing world," said GAVI Interim CEO Helen Evans following the group photograph.

"We need to raise awareness out about this terrible disease, but we cannot do it alone. I urge all of you to spread the word about pneumonia so we can move it up the international agenda and stop children dying unnecessarily from this preventable and treatable disease," she added.

With help from its partners such as WHO, UNICEF, and developing country governments, the GAVI Alliance plans to introduce new vaccines against pneumococcal disease, the leading cause of pneumonia, into more than 40 of the world's lowest-income countries by 2015.

To learn more about the devastating effects of pneumonia on children and what can be done against it the fight, visit www.worldpneumoniaday.org.