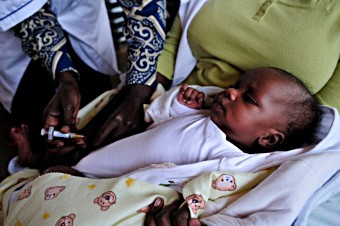 Nyamata Health Center, Bugasera District, Rwanda - since 2009, pneumococcal vaccines are injected into the right thigh of babies at every health centre in Rwanda. Copyright Shannon Jensen.

Geneva, 21 May 2010 - The GAVI Alliance welcomes the commitment made by nations at the World Health Assembly in Geneva today to combat the world's biggest killer of children under five.

Governments adopted a resolution this afternoon that calls on the World Health Organization (WHO) and its 193 Member States to take concrete actions to tackle pneumonia, which kills more than 1.5 million children a year, according to the most recent WHO figures.

The resolution was passed by consensus, underlining a new universal commitment to combating pneumonia.

"This is the first time that governments of the world have come together to make a unified, comprehensive commitment to tackle the most prevalent killer of young children in the world," said GAVI Alliance CEO Julian Lob-Levyt.

"We applaud this initiative and we call on governments to adhere to the commitment they made here today to protect the world's most vulnerable citizens."

The resolution, on "Accelerating progress towards achievement of Millennium Development Goal 4 to reduce child mortality: prevention and treatment of pneumonia" calls on governments to combat pneumonia through implementation of three groups of effective interventions outlined in the WHO/UNICEF Global Action Plan for the prevention and control of Pneumonia (GAPP).

"Only by intensifying efforts to address pneumonia can the world hope to make significant progress on reaching Millennium Development Goal 4, to reduce child mortality by two-thirds by 2015," said Lob-Levyt.

"Almost all of the children who are struck down by this disease are in low-income countries, but protecting them depends not only on their own governments, it also depends on the governments and people of wealthier countries who can provide funding for life-saving interventions, including vaccination. We should all remember that most child deaths from pneumonia can be prevented," he added.

The GAVI Alliance, with support from partners such as WHO, UNICEF and the developing countries themselves, has funded vaccination for more than 60 million children in some 60 countries against Hib and plans to introduce new vaccines against pneumococcal disease in more than 40 low-income countries by 2015.

Rwanda and Gambia are the only developing countries where children currently receive pneumococcal vaccines as part of routine immunisation programmes. The GAVI Alliance's Advanced Market Commitment, which is designed to accelerate development and manufacture of new vaccines tailored for developing countries, aims to facilitate further introduction of pneumococcal vaccines this year.

Funding, however, remains a challenge. GAVI is working to raise an additional US$2.6 billion in order to introduce the pneumococcal vaccines, as well as new vaccines against rotavirus, one of the leading causes of the most severe forms of diarrhoea. After pneumonia, diarrhoea is the second leading killer of children under five, responsible for 1.3 million deaths a year.

Despite its devastating impact, pneumonia had until recently garnered little public attention and was dubbed the "the forgotten killer of children" in the title of a 2006 UNICEF/WHO report on the disease.

Awareness about the burden of pneumonia is growing, however, and the WHA resolution will be an important boost for many organizations around the world working to overcome the disease. Last November, the Global Coalition against Child Pneumonia launched the first World Pneumonia Day, celebrated in 36 countries on six continents. The GAVI Alliance is an active member of the Coalition, which has grown to a membership of more than 100 organizations and is currently planning events for World Pneumonia Day on November 12 this year.