The GAVI Alliance welcomes the decision. The national scale-up of pentavalent vaccine in India could save a million lives. 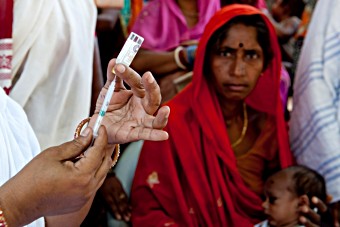 New Delhi, 10 October 2013 - The GAVI Alliance welcomes and supports today’s decision by India’s National Technical Advisory Group on Immunisation (NTAGI) to recommend the national scale-up of pentavalent vaccines, which combine the antigens for several deadly diseases in a single shot.

With the additional protection provided by this vaccine more than a million future deaths could be averted by 2020.

“GAVI applauds this decision and India’s leadership in the fight to reduce childhood mortality,” said Dr Seth Berkley, CEO of the GAVI Alliance.

“Expanding access to pentavalent vaccines will play a key role averting the deaths associated with Hib pneumonia and meningitis, and liver cancer. NTAGI’s recommendation will ultimately strengthen India’s routine immunisation programme and ensure that vaccines reach those most in need. India is one of world’s largest producers of vaccines, we hope this is the beginning of a new era in public health in India where highly cost-effective Indian vaccines are used locally to reduce infant mortality.”

The 5-in-1 pentavalent vaccines are designed to replace the standard diphtheria-tetanus-pertussis (DTP) vaccines with ones which combine DTP with hepatitis B (hep B) and Haemophilus influenzae type B (Hib). While DTP and hep B are already part of India’s national immunisation programme, until now Hib has been mainly available only in the private sector, this is despite the fact that India is the largest producer of Hib vaccines in the world.

India is one of world’s largest producers of vaccines, we hope this is the beginning of a new era in public health in India where highly cost-effective Indian vaccines are used locally to reduce infant mortality.

Globally, Hib is the second most common cause of bacterial pneumonia deaths and the third biggest vaccine preventable cause of death in children aged under five, causing eight million serious illnesses and claiming 400,000 deaths each year.

Hib vaccines have been in use for nearly three decades, with more than a billion doses used in total. By the end of 2013 GAVI alone would have supported the use of more than 700 million doses through its pentavalent programmes in 72 countries.

Pentavalent vaccines were first introduced into Kerala and Tamil Nadu in 2011 on a pilot basis. Since then it has been introduced into seven other states: Karnataka, Puducherry, Goa, Gujarat, Haryana, Jammu & Kashmir and Delhi. All but Delhi have been carried out with GAVI support.

Today’s decision by NTAGI to approve the national scale up of the pentavalent vaccine follows the recommendation of the technical sub-committee. In reaching its decision the technical committee considered key factors, including a report by the National Adverse Events Following Immunisation (AEFI) committee, which considered the evidence of reported deaths in Kerala following pentavalent vaccinations.

This report concluded that the deaths were not causally related to the pentavalent vaccine, thus allaying the fears about the safety of the vaccine.