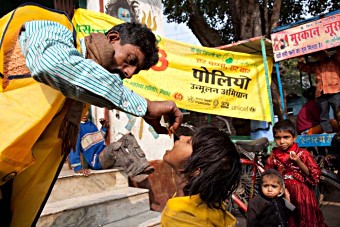 Geneva, 13 January 2012 – India’s success in staying free of polio for a year is a hugely important step towards a world free of this terrible disease, and bodes well for immunisation in a country where too many children still die from vaccine-preventable diseases.

Today, India marks the passage of an entire year without a new polio case. If tests confirm that India has indeed managed to stop the transmission of wild poliovirus, then the World Health Organization (WHO) will remove it from the list of polio-endemic countries, reducing that group to just three – Nigeria, Pakistan, and Afghanistan.

Once an exporter of polio to other countries, India has long presented formidable challenges for polio eradication. It has migrant and isolated communities, and a huge population with approximately 26.5 million new children born every year.

To achieve a year without new polio cases, polio vaccinators in India have had to find and immunise children wherever they are – at brick kilns, in transit on trains, or living in remote regions of the country. A massive and impressive undertaking.

This progress shows what can be done. It also signals India’s renewed political commitment to immunisation.

In December last year, India took another enormous step forward when it introduced the pentavalent vaccine in two states to protect children there from diphtheria, tetanus, pertussis, hepatitis B, and Haemophilus influenzae type b (Hib).

This builds on the work done by India’s impressive scientific and research community, a thriving vaccine industry that supplies more than 60% of UNICEF’s vaccines, and a proposed five-year plan that includes an encouraging new policy on vaccination.

All children everywhere should receive the protection from disease and ill health that immunisation can offer and India’s remarkable progress against polio is a major milestone on the road to a world in which children can have the opportunity to grow up free from the threat of preventable diseases.

The GAVI Alliance congratulates the Indian Government and people on their extraordinary progress and commitment to defeat polio and wish them every further success in realising the benefits of immunisation.