Japan commits US$ 18.5 million to support immunisation in Ebola-affected region 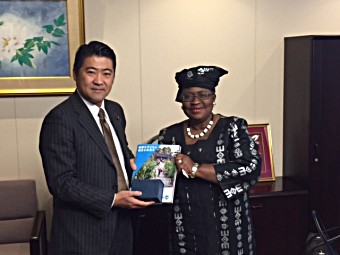 TOKYO, 10 February 2016 – The Government of Japan has committed US$ 18.5 million to help Gavi restore immunisation services in Ebola-affected countries. The contribution, which is for 2016 and is Japan’s largest to Gavi to date, will also support the strengthening of health systems in 13 countries, including Guinea, Liberia and Sierra Leone, where thousands of children missed out on routine vaccinations during the Ebola outbreak.

State Minister for Foreign Affairs, Seiji Kihara, made the announcement ahead of a meeting in Tokyo last Thursday with new Gavi Board Chair Dr Ngozi Okonjo-Iweala. Japan’s commitment means that all members of the G7, which will be chaired this year by Japan, have now made pledges to Gavi to support childhood immunisation for the 2016 to 2020 period.

Japan’s contribution will help Gavi support work to trace children who missed out on immunisation in the Ebola-hit countries and ensure they are reached through catch-up programmes. The new funding will also help strengthen health systems in the Ebola-affected West Africa region, including purchasing new cold chain equipment to ensure vaccines are stored at the correct temperatures.

“We’re making this new contribution because we highly appreciate the achievements of Gavi so far and we appreciate your contribution to the area of health,” said Mr Kihara.

“I am very happy that the Japanese Government recognises Gavi as a smart investment,” said Dr Okonjo-Iweala. “Japan is a leading player in global health so this first commitment towards Gavi’s work for the 2016 to 2020 period is very significant for us.”

Japan has been a donor to Gavi since 2011 and prior to today’s announcement had contributed a total of almost $ 54 million towards immunisation programmes supported by the Vaccine Alliance. In 2013, then-Parliamentary Vice Minister Kihara attended Gavi’s Mid-Term Review, held in Stockholm, where progress against Gavi’s 2011-2015 targets was found to be on track.

Between 2000 and 2015, the Gavi partners helped immunise more than 500 million of the world’s poorest children, averting more than seven million deaths. In January 2015, at the Gavi Pledging Conference held in Berlin, German Federal Chancellor Angela Merkel led donors in pledging more than US$ 7.5 billion to fund Gavi programmes between 2016 and 2020.