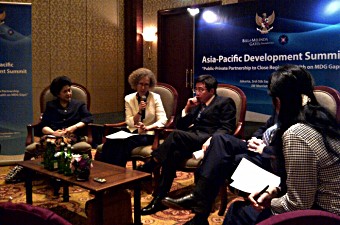 Jakarta, 4 September 2012 — The Government of Japan underlined its commitment to protecting millions of children from vaccine-preventable diseases today by renewing its funding support for the GAVI Alliance.

“For the fiscal year 2012, I am hereby happy to announce that Japan will make a contribution of US$ 9.07 million”, said Kimihiro Ishikane, Ambassador Extraordinary and Plenipotentiary Mission of Japan to the Association of Southeast Asian Nations, speaking at the Asia Pacific Development Summit.

“Japan is also ready to make due contribution accordingly from the year 2013 onwards" he added.

The Summit, which has brought together governments of the Asia Pacific region, heads of international organisations, donor countries, private sector companies and civil society organisations, is co-hosted by the Indonesian Government, the Bill & Melinda Gates Foundation and the ASEAN Foundation.

Japan’s announcement, which follows a first-ever contribution to GAVI at the Alliance’s Pledging Conference in London last year, demonstrates the country’s continued commitment to improving the lives of people living in the world’s poorest countries.

Japan has also been an important supporter of GAVI’s innovative fund-raising mechanism, the International Finance Facility for Immunisation (IFFIm). By investing in uridashi “Vaccine Bonds” through IFFIm, the Japanese people have helped raise US$ 1.9 billion to support GAVI’s immunisation programmes. In total, Japanese investors have accounted for approximately half of the total amount raised by IFFIm since its inception in 2006.

“We welcome this renewed contribution from Japan that will contribute to accelerating progresses towards the Millennium Development Goal 4 on reducing child mortality” said Helen Evans, Deputy CEO of GAVI Alliance. “By 2015, GAVI programmes have the potential to prevent an additional 3.9 million future deaths.”

Participants at this week’s Asia Pacific Development Summit are working to help close regional gaps in the race to achieve the health-related MDGs by 2015.

More than three million children still die in Asia and Oceania before their fifth birthday, while India, Indonesia and Bangladesh account for more than 50% of the 23 million children around world who do not receive basic vaccinations. GAVI is working throughout the region to reduce large inequities in access to appropriate, cost-effective and life-saving vaccines.

“Strengthening primary healthcare services to improve welfare, is fundamental for Indonesia’s health system,” said Nila Moeloek, the Indonesian President’s Special Envoy on the MDGs. “We need to provide equal access to healthcare for everyone, in particular women and children. It is the right push forward and it will give the best possible start in life for the future generations.”