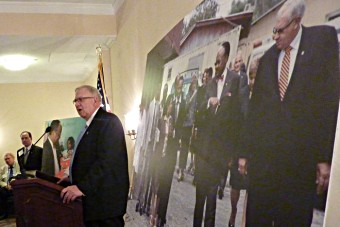 Washington, DC, 13 March 2014 – Lions Clubs International has reaffirmed its commitment to protect children from measles and rubella in the world’s poorest countries with a US$ 7.5 million initial donation to the GAVI Alliance to help fund measles-rubella programmes.

The payment – announced at an event on Capitol Hill on Wednesday – is part of a broad partnership under which Lions Clubs has begun to deploy its 1.35 million members globally to support the Alliance and raise US$ 30 million for measles-rubella immunisation programmes. The total donation is being doubled under the GAVI Matching Fund by the Bill & Melinda Gates Foundation and the UK Government; this means the Alliance will receive US$ 60 million overall.

“The partnership between Lions Clubs and the GAVI Alliance is protecting millions of children in the world’s poorest countries against measles and rubella,” said Wayne Madden, chairperson of Lions Clubs International Foundation (LCIF). “We’re increasing access to immunisation, strengthening communities and saving lives in the process.”

The GAVI Alliance is scheduled to help five countries to introduce the measles-rubella vaccine this year. The number of country introductions will reach 49 by 2020. Lions Clubs plans to draw on its network of on-the-ground members to work with local leaders to raise awareness of the measles-rubella vaccination, helping coordinate community-level publicity and volunteering at vaccination centres.

“Vaccines can’t save lives if children don’t receive them, so Lions work with the community to make sure children are being vaccinated,” said Dr Tebebe Yemane-Berhan, a member of the LCIF Steering Committee from Ethiopia. “We look forward to a future where every child has access to life-saving vaccines.”

By providing an average of 25 million hours of community service per year globally across 208 countries and geographical areas, Lions Clubs have extensive experience in development work. It has worked with the Gates Foundation and the Measles & Rubella Initiative since 2010.

“We are grateful to Lions Clubs for partnering with the GAVI Alliance and joining the United States in this global project, working together toward reaching our goal of ending child deaths caused by measles,” said GAVI Alliance Director of US Strategy Natasha Bilimoria. 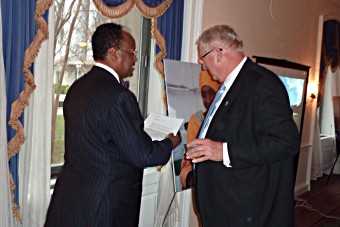 Congress is currently considering the Administration’s fiscal year 2015 budget, which includes $200 million to help fund global vaccine programmes through the Alliance, the largest amount ever requested for its work  by the United States. This comes as GAVI prepares to outline how donor investments will enable Alliance partners to reach millions more children with vaccines between 2016 and 2020.

Since 2000, with support from donors, including the United States, and implementing countries the GAVI Alliance has helped save approximately six million lives by immunising an additional 440 million children. In 2011, donors committed $7.4 billion for Alliance programmes between 2011-2015, enabling an unprecedented acceleration of vaccine introductions. More than 60 introductions are anticipated in 2014 alone, compared to just over 150 in total between 2000 and 2012.