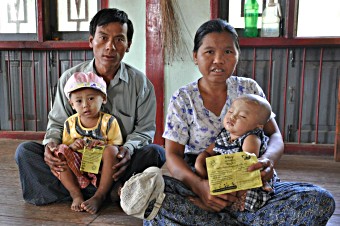 To ensure the measles campaign reaches its targeted 6.4 million under-fives, the Health Ministry has distributed invitation cards to families, as shown in this image. Photo credit: GAVI/2012.

Nay Pyi Taw, Myanmar, 28 March 2012 – Myanmar launched a nationwide measles’ vaccination campaign this week that will pave the way for the introduction of two GAVI-supported vaccines into the national immunisation programme.

From the training of health workers to alerting parents to bring their children to immunisation sessions, the 10-day mass campaign will serve as a dress rehearsal for the rollout of measles second dose vaccine in April and, later in 2012, the five-in-one pentavalent vaccine.

Both measles 2nd dose vaccine and pentavalent, which protects children from diphtheria-tetanus-pertussis, hepatitis B and Haemophilius influenzae type b, are being introduced in Myanmar with the support of the GAVI Alliance and its partners, including WHO and UNICEF.

“2012 is an important year for Myanmar’s immunisation programme, not only for the mass measles campaign, but also for the intensification of routine immunisation,” said Health Minister Professor Dr. Pe Thet Khi at a special ceremony in Myanmar’s capital Nay Pyi Taw.

“We want to leave no stone unturned in our effort to reach every single child.”

To ensure the measles campaign reaches its targeted 6.4 million under-fives, the Health Ministry has distributed invitation cards. If families fail to turn up at their local immunisation clinic, health workers will go direct to their villages to deliver the measles vaccine.

The ‘microplan’ represents a test case for the rollout of pentavalent when the stakes for failing to reach remote communities in what is the second largest country in southeast Asia will be much higher.

“This is the first time that Myanmar is introducing a multivalent vaccine,” says Dr. Vinod Bura, Medical Officer for WHO of Myanmar’s Expanded Programme on Immunisation (EPI). “With five antigens in each dose, every vial has to count.”

The Myanmar Government has invited a team of observers from UNICEF, WHO, UN Foundation and GAVI to monitor the mass measles campaign.“

I’ve seen nothing but excellent coverage,” said Andrea Gay, Executive Director of Children's Health at the UN Foundation, which is funding the measles vaccination campaign.

“Everyone has come with their cards which are wrapped round the empty vial to ensure any problems can be traced back from the child to the actual vaccine.”

The Health Ministry has employed new and traditional channels of communication to alert parents to the measles campaign, from radio and television adverts to announcements made through loudspeakers mounted on vans.

Similar tactics are already being used to prepare the ground for the introduction of measles 2nd dose while the imminent rollout of pentavalent was recently announced in the National Association of Paediatrician’s newsletter.

In a sign of the Health Ministry’s success in mobilising grassroots support for vaccines, Buddhist monks are allowing the Health Ministry to use their monasteries as temporary immunisation posts. An estimated 89 percent of Myanmar’s population is Buddhist.

“So much has changed since I delivered my first vaccine,” says 56-year-old Daw Aye Mya, who has served as a midwife in Kha Yaung village, near Yangon, for 33 years, “These days, the government uses every form of communication to mobilise the nation.”

Mya stands under a flag depicting Pyit Taing Htaung, the traditional rural doll that has become the symbol of Myanmar’s measles campaign. The rosy-cheeked doll bounces back upright if knocked over – a metaphor for the Health Ministry’s plans to ensure Myanmar’s youngest generation does not fall victim to measles infections.

The campaign, the third in the last 10 years, follows reports of an estimated 1,869 cases of measles in 2011, a worrying sign that the number of unimmunised children in Myanmar is sufficiently large to cause a major epidemic.

In the 1970s, almost all children in Myanmar were infected by the measles virus before the age of 10 years, with the infection accounting for 20 percent of all hospital admissions. At the time, it was estimated that measles claimed 10 - 20,000 lives per year.

However, since measles vaccine was introduced into the routine EPI programme for infants in 1987 and catch-up campaigns were introduced, measles mortality and morbidity has fallen by 80 percent.