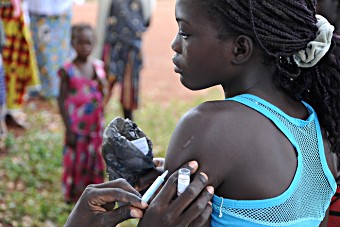 A young woman in Burkina Faso is vaccinated on 20 September 2010 with the new MenAfriVac vaccine that will protect her against epidemics of Meningitis A. Source: PATH/2010.

Ouagadougou, 6 December 2010 – Safely back in his mother’s arms and still crying from the painful jab of an injection needle, 20-month-old Eric Nabyoure has just earned himself a place in African medical history.

At a special ceremony in Burkina Faso, Eric has become the first baby to receive a powerful new and low-cost vaccine that offers life-long protection from the deadly meningitis a epidemics that periodically devastate the region.

“I have seen sick people and it is not nice to see,” says Eric’s mother Marguerite, “they’re really in a lot of pain.”

Burkina Faso is the first stop in a mass vaccination campaign, funded by GAVI, which will see the new MenAfriVac vaccine administered to four million children in Mali and Niger before targeting the rest of the so-called Meningitis Belt – a swathe of 25 sub-Saharan countries, stretching from Senegal in the west to Ethiopia in the East, that account for 95% of the world’s meningococcal meningitis disease burden.

Every few years, epidemics threaten the region’s 500 million inhabitants during the dry season from December to June. In 1996, a particularly deadly meningococcal disease struck 250,000 people claiming 25,000 lives and leaving another 50,000 with disabilities that included brain damage and loss of hearing.

“If all of this works like we think it is going to work, then we are going to eliminate these epidemics. Stop. Period,” said Marc LaForce, Director of the Meningitis Vaccine Project (MVP) – an international partnership involving WHO and PATH and funded by The Bill & Melinda Gates Foundation.

For the past 10 years, MVP has driven the research and development of a new vaccine that would be both affordable for developing countries and also resolve the limitations of existing Meningitis A vaccines, which are only available for over 30-year-olds. The MenAfriVac meets both demands. 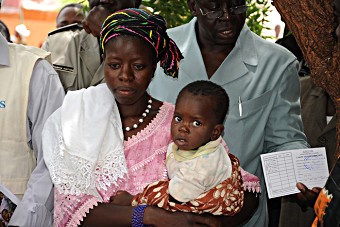 A woman and her child wait to receive their vaccination on September 20, 2010, with the new MenAfriVac vaccine that will protect them against epidemics of Meningitis A. Source: PATH/2010

The conjugate vaccine, produced by the Serum Institute of India, is approved for children aged one year and over and, at US$ 0.50 per dose, is cheap. WHO decided that the vaccine met international standards of safety and efficacy in June 2010.

An estimated 250 million doses of the new conjugate A vaccine will be needed over 10 years to innoculate all individuals between one and 29 years of age in the meningitis belt.

“This is a story for donors, who increasingly need to know that the money which is going into developing countries is actually having an impact,” said Helen Evans, interim CEO of the GAVI Alliance, shortly after holding young Eric for his MenAfriVac immunisation. “This is a good example of something which has a clear and measurable impact.”