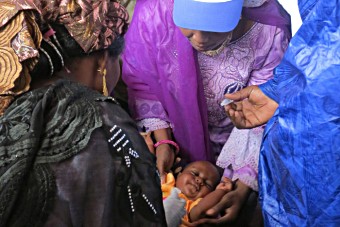 Niger’s Minister of Health administers one of the first doses of vaccine to an infant.
Credit: UNICEF/2014.

Niamey, 5 August 2014 - Niger has today joined a growing list of nations which have introduced vaccines against both pneumococcal disease and rotavirus nationally, in a move aiming to significantly reduce child mortality.

Dr. Seth Berkley, CEO of the GAVI Alliance, praised the government’s proactivity, saying it will “not only save the lives of children, but also significantly reduce the health and economic burden rotavirus and pneumonia bring, thereby helping to reduce poverty and promote economic growth in Niger.”

Pneumonia alone kills more children than AIDS, malaria and measles combined, with almost two million children globally dying each year. Rotavirus vaccines will also make a difference to the health of Niger’s population, targeting the most common cause of severe and fatal diarrhoea in young children worldwide, which in Africa claims the lives of six hundred children under five die every day.

These introductions see Niger play its part in the 2025 integrated Global Action Plan for the Prevention and Control of Pneumonia and Diarrhoea, which aims to see childhood deaths due to pneumonia and diarrhoea eliminated by 2025.