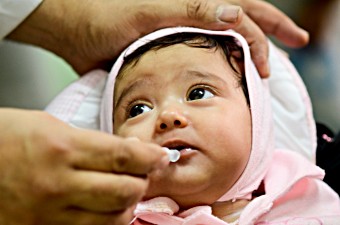 Since 2000, GAVI has prevented approximately six million future deaths thanks to donor support for routine immunisation such as the rotavirus vaccine in Yemen in 2012.
Credit: Amira Al-Sharif/GAVI/2012.

Geneva, 19 November 2013 – Norway and the Bill & Melinda Gates Foundation (BMGF) this week highlighted how joint support for GAVI has helped save millions of children’s lives by increasing access to immunisation.

“Central to the collaboration between Norway and the BMGF are the joint efforts in the GAVI Alliance, which seeks to increase access to immunisation in poor countries,” said the Office of the Norwegian Prime Minister, after a meeting between Premier Erna Solberg and Bill Gates, co-chair of the BMGF in Oslo last Friday.

“The GAVI Alliance has already helped to save millions of lives. The new Norwegian Government is therefore committed to doubling its contribution to GAVI between 2011 and 2015,” said the statement.

According to new impact figures released in October, by the end of 2013, an additional 440 million children will have been immunised against the leading vaccine-preventable diseases in the world's poorest countries with GAVI support since 2000. This will have prevented approximately six million future deaths.

As original donors to GAVI, both the Norwegian Government and the BMGF have supported the Alliance since its foundation in 2000.

The BMGF is a founding partner of the Alliance and has made several commitments totalling US$ 2.5 billion to date, while the Norwegian Government is one of only two donors that contribute to GAVI through three funding channels: direct, IFFIm and the Advance Market Commitment.

“Our meeting today has enabled us to explore possible future avenues of cooperation, in order to identify opportunities that can enable us to take further steps towards a better future for all,” said Prime Minister Solberg after her meeting with Bill Gates.