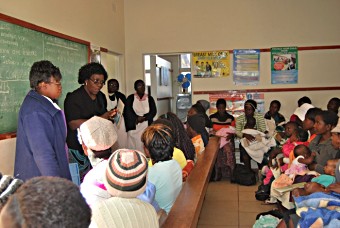 “I had brought him in for his usual vaccines,” said Sharon Mahachi, Joe’s mother. “But when I heard that the new vaccine was now being administered I was very keen to have him vaccinated. It’s better to be safe than sorry.”

On 26 July the Government of Zimbabwe, through its partnership with the GAVI Alliance and support from United Nations Children’s Fund (UNICEF), World Health Organisation (WHO) and USAID, intensified its fight against child mortality and morbidity by introducing the PCV 13 in clinics around Zimbabwe to combat the world’s leading killer of children under five.

“This clinic is one of the busiest in Harare, and on most days we immunize up to 300 babies,” said Kambuzuma Polyclinic’s sister-in-charge Esther Makunike. “Today we have taken the opportunity to educate all the mothers in attendance about this new vaccine. The response has been very positive.”

According to the Zimbabwe Demographic Health Survey (2010-11), the under-five mortality rate in the country is 84 deaths per 1,000 live births. Most of these children die of preventable diseases, including pneumonia, which is the third leading cause of death in children under five after newborn disorders and AIDS. The pneumococcal vaccine will also protect children from meningitis, sepsis, and in some cases, deafness.

“It is no longer acceptable for any child to die from a preventable disease,” said UNICEF Representative Dr. Peter Salama. “The introduction of the pneumococcal vaccine in Zimbabwe is another sign that Zimbabwe’s health sector is well on the road to recovery.” 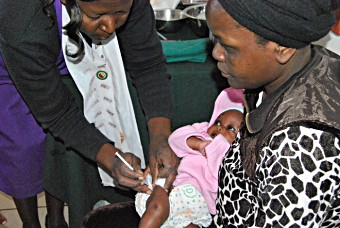 Baby being vaccinated at Dzivarasekwa clinic in Harare.

As part of its on-going efforts to provide life-saving vaccines to all children under 5, the Ministry of Health and Child Welfare recently launched a countrywide immunisation campaign that saw around two million children under five being immunised against polio and measles as well as receiving Vitamin A supplementation. The Government of Japan was the major donor partner for this successful campaign, which saw coverage rates close to 100% including among members of the Apostolic Faith groups who previously refused to have their children immunised.

“The Pneumococcal Conjugate Vaccine will help to address the problem of pneumonia in children and contribute towards the reduction of mortality due to pneumonia and consequently pave the way to the achievement of MDG 4,” said WHO Representative, Dr. Custodia Mandhlate.

Since 2000, GAVI has worked to reduce the gaps in the access to vaccine to the nearly 19 million children in developing countries who do not have access to life saving vaccines. Zimbabwe is the 18th GAVI-eligible country to roll out pneumococcal vaccines in the developing world since 2010. The introduction of these vaccines is largely possible thanks to the Advance Market Commitment (AMC) for pneumococcal vaccines, an innovative financing mechanism that has raised US$1.5 billion through donations from the governments of Italy, the United Kingdom, Canada, the Russian Federation, Norway, and the Bill & Melinda Gates Foundation. It is hoped that up to 90 million children will benefit from this programme between 2011 and 2015.

“No child should have to die of a disease that we can prevent with vaccines. Zimbabwe’s roll-out of the pneumococcal vaccine marks yet another ambitious and encouraging step to make this life-saving vaccine available to all children, wherever they are born,” said GAVI Alliance CEO Seth Berkley, MD.

The successful roll out of the programme by the Ministry of Health and Child Welfare was facilitated by support from UNICEF and WHO who ensured the regular supply of quality vaccines and an adequate Cold Chain and Logistics system, improved planning and supervision of immunization activities, and support of training of health workers in immunization; and by USAID through the USAID Maternal Child Health Integrated Program (MCHIP) in Zimbabwe, which has been providing technical assistance to the Ministry to revise the national immunisation guidelines and protocols in readiness for the introduction of this important vaccine.

“The United States Government applauds the Ministry of Health and Child Welfare’s work to introduce pneumococcal conjugate vaccine nationwide and its launch in Zimbabwe today,” said Dr. Jo Keatinge, USAID Health Development Specialist for Maternal, Newborn and Child Health in Zimbabwe. “The Ministry spearheaded efforts to make this vaccine available through a successful application to GAVI.”

Mothers wait to vaccinate their babies at the Dzivarasekwa Clinic in Harare.

The positive response to the launch of the PCV 13 vaccine in Zimbabwe is evident by the number of mothers who are having their babies immunised. In the other Harare high density suburbs of Mbare, Kambuzuma and Dzivarasekwa, mothers waited patiently today for their turn to protect their babies.

“Zimbabwean mothers take the health of their children very seriously,” said Ministry of Health and Child Welfare’s Expanded Programme on Immunisation (EPI) Manager, Ms. Mary Kamupota. “The large turn out at all the clinics and the willingness of mothers to immunize their babies will ensure a better future for all Zimbabweans.”

By Elizabeth B Mupfumira, UNICEF Zimbabwe