Rotavirus leading cause of diarrhoea

Geneva, 14 March 2013 – The largest and most comprehensive study of childhood diarrhoea has confirmed rotavirus as the single biggest cause of diarrhoea-related death and illness in developing countries. This latest evidence suggests that a large number of children are dying from this vaccine-preventable pathogen, and supports the decision by the GAVI Alliance to prioritise rotavirus vaccines.

These findings reinforce the GAVI Alliance’s decision to help 14 countries to introduce rotavirus vaccines, protecting four million children by the end of 2012. GAVI plans to scale up its support to help bring the number of introductions to at least 30 by 2015.

“One in every 260 children born globally will die of rotavirus before their fifth birthday, that’s more than 1,200 a day or eight children every ten seconds,” said Dr Seth Berkley, CEO of the GAVI Alliance. “These latest findings strongly reinforce GAVI’s decision to roll out of rotavirus vaccines as part of routine immunisation among infants in developing countries. But now there is an urgent need to accelerate this to expand the coverage. This is going to become an even more important part of GAVI’s work.”

Published today in the Lancet, the Global Enteric Multicenter Study (GEMS) was a three-year study enlisting more than 22,000 children in seven GAVI-eligible countries in sub-Saharan Africa and Asia: Bangladesh, India, Kenya, Mali, Mozambique, the Gambia and Pakistan. Researchers aimed to map the role of 40 known pathogens in childhood diarrhoeal disease.

One in every 260 children born globally will die of rotavirus before their fifth birthday, that’s more than 1,200 a day or eight children every ten seconds.These latest findings strongly reinforce GAVI’s decision to roll out of rotavirus vaccines as part of routine immunisation among infants in developing countries.

But the new study, led by researchers at the University of Maryland School of Medicine’s Center for Vaccine Development, found that just four pathogens were responsible for the vast majority of cases of moderate to severe diarrhoea, leading to a 8.5 fold increase in the risk of death or significantly stunted growth.

“Worldwide, rotavirus accounted for more than 500,000 diarrhoea-related deaths in 2004, most in developing countries,” said Dr Uma Chandra Mouli Natchu and Dr Shinjini Bhatnagar, at the Pediatric Biology Centre, Translational Health Science and Technology Institute, in Haryana, India, commenting in an accompanying Lancet editorial article. “Therefore, rotavirus vaccination should be deployed in all countries, and efforts need to be made to increase access to affordable vaccines so that countries are able to introduce the vaccine quickly.”

Another finding was that 61% of deaths occurred more than one week after children were diagnosed with moderate to severe diarrhoea, when children may no longer be receiving care. Indeed 56% of deaths occurred at home, suggesting that earlier studies may have only focussed on deaths occurring in health centres. This may go some way to explain why data was so limited in countries with high mortality, where 95 per cent of diarrhoea-related mortalities occur. It also implies that we have been underestimating the total burden of these deaths.

In addition to rotavirus, the other main pathogens implicated included a type of E. coli called enterotoxigenic Escherichia coli producing heat-stable toxin (ST-ETEC), Shigella and Cryptosporidium. Across all three of the age-groups studied – infants (0-11 months), toddlers (12-23 months) and children (24-59 months) – rotavirus was found to be by far the most common cause, but particularly so for infants. 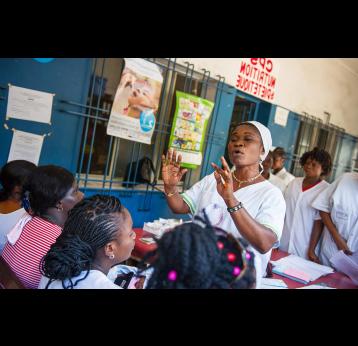