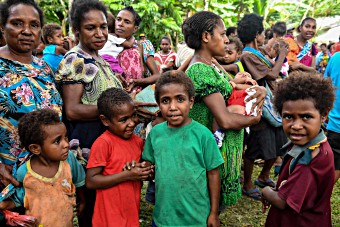 While PNG was declared polio-free in 2000 and introduced the inactivated polio vaccine (IPV) in August 2015 with support from Gavi and the Global Polio Eradication Initiative (GPEI), many parts of the country remained at risk of cVDPV because of poor immunisation coverage rates, with poor water sanitation and hygiene posing additional threats to child health.

By focusing on its long-term strategy to increase routine immunisation coverage in PNG by 2020, the Vaccine Alliance is addressing the long-term causes of the polio outbreak.

In 2017, Gavi worked closely with the PNG Government and partners - WHO, UNICEF, the US Center for Disease Control (CDC), the World Bank and the Australian Department of Foreign Affairs and Trade – to develop a tailor-made plan to boost routine immunisation by 2020.

Gavi continues to monitor PNG’s emergency response to the polio outbreak, with the National Department of Health (NDOH) leading efforts to limit the spread of the disease, in collaboration with WHO, GPEI and other partners. The National Public Health Emergency plan includes conducting large-scale immunisation campaigns and strengthening surveillance systems for early virus detection.

PNG’s introduction of IPV in August 2015, with support from Gavi and the GPEI, was part of the Polio Eradication and Endgame Strategic Plan, which is targeting one of the fastest vaccine roll-outs in history: the introduction of at least one dose of IPV into the routine immunisation schedules of all Gavi-supported countries.

The vaccine protects children from both the polio virus, and – unlike oral polio vaccine (OPV) – does not lead to vaccine-derived polio (see explainer box below).

Countries introducing IPV receive a one-time cash grant from Gavi, funded by GPEI, to support some of the additional activity costs related to introducing the new vaccine.

These activities may include health worker training, social mobilisation campaigns, micro-planning, expansion or rehabilitation of cold chain equipment, printing of materials (such as immunisation cards), technical assistance and modifications to the surveillance systems.

Vaccine-derived poliovirus (VDPV) results from rare strains of the poliovirus that have genetically mutated from the strain contained in the oral polio vaccine (OPV). The OPV contains a live, attenuated (weakened) vaccine-virus. When a child is vaccinated, the weakened vaccine-virus replicates in the intestine and enters into the bloodstream, triggering a protective immune response in the child.

Like wild poliovirus, the child excretes the vaccine-virus for a period of six to eight weeks. Importantly, as it is excreted, some of the vaccine-virus may no longer be the same as the original vaccine-virus as it has genetically altered during replication. This is called a VDPV.

On very rare occasions, if a population is seriously under-immunised, there are enough susceptible children for the excreted vaccine-derived polioviruses to begin circulating in the community. If the vaccine-virus is able to circulate for a prolonged period of time uninterrupted, it can mutate and, over the course of 12-18 months, reacquire neurovirulence. These viruses are called circulating vaccine-derived polioviruses (cVDPV).

The lower the population immunity, the longer these viruses survive. The longer they survive, the more they replicate, change, and exchange genetic material with other enteroviruses as they spread through a community.

If a population is fully immunised against polio, it will be protected against the spread of both wild and vaccine strains of poliovirus.

To eliminate the risk of VDPV cases, the Polio Eradication and Endgame Strategic Plan calls for the phased removal of OPV by 2019 – a critical step towards polio eradication. The process started in April 2016 with the “global switch” – the replacement of trivalent OPV, containing type 2 virus, by bivalent OPV, comprising poliovirus types 1 and 3 only.