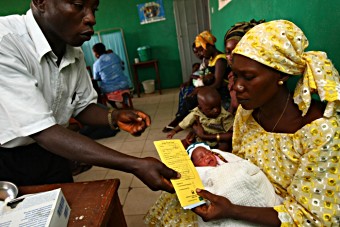 Thanks to GAVI's close partnership with pharmaceutical companies, immunisation against pneumococcal diseases is already a fixture on Rwandan childrens' vaccine cards. GAVI/09/Thomas Rippe.

Geneva, 23 March 2010 - Millions of infants and young children in the world's poorest countries will receive potentially life-saving vaccines that help protect against pneumococcal disease, including pneumonia -- the world's biggest childhood killer, thanks to new agreements made with two major pharmaceutical firms, the GAVI Alliance announced today.

GlaxoSmithKline (GSK) and Pfizer Inc. are the first two companies to make long-term commitments to supply new vaccines against pneumococcal disease. Supply may start as early as 2010 and at a fraction of the price charged in industrialised countries.

The supply agreements were made possible thanks to the Advance Market Commitment (AMC) for pneumococcal disease, an innovative financing mechanism piloted by the GAVI Alliance. The governments of Italy, the United Kingdom, Canada, Russia, Norway and the Bill & Melinda Gates Foundation committed US$1.5 billion to launch the programme.

"Today's landmark announcement promises to make new vaccines available affordably, where they are urgently needed, and faster than ever before. Through this AMC and thanks to the political will demonstrated by donors and least developed nations and the participation of the pharmaceutical companies, prevention against the world's biggest childhood killer is now within reach," said GAVI CEO Julian Lob-Levyt.

Leading cause of death among young children

Pneumococcal disease takes the lives of 1.6 million people each year - including approximately 800,000 children before their fifth birthday. More than 90 percent of these deaths occur in developing countries. Pneumonia, the most common form of serious pneumococcal disease, accounts for one in every four child deaths, making it the leading cause of death among young children.

GAVI estimates that the introduction of suitable and affordable vaccines against the disease could save approximately 900,000 lives by 2015 and up to seven million lives by 2030.

The two participating firms have committed to supply 30 million doses each per year, for a 10 year period. These vaccines will be made available at US$ 3.50 per dose to be paid by GAVI and the developing country governments that introduce the vaccines.

For approximately 20% of the doses, companies will also receive an additional payment of US $ 3.50 for each dose they provide, which is paid with donor commitments (AMC funds). In total, this is a fraction of the current cost of pneumococcal vaccines in many industrialised countries.

"GSK is proud to join the AMC partners in this historic effort, which transforms public health in the world's poorest countries," said Andrew Witty, CEO of GlaxoSmithKline.

"The combined efforts of governments, GAVI, the Gates Foundation and vaccine manufacturers, mean that children in Africa will start to receive vaccines this year to help prevent pneumococcal disease. GSK is delighted to be among the first suppliers of vaccines to GAVI through this innovative mechanism."

"Pfizer is gratified to participate in this public-private partnership. We commend GAVI and the other AMC partners for their ingenuity in launching an innovative financing mechanism like AMC to bring important new vaccines to least developed countries," said Jeffrey Kindler, chairman and chief executive officer, Pfizer Inc.

"Last year, in partnership with GAVI, we contributed the first pneumococcal conjugate vaccine for children in Africa and the AMC extends our commitment to broaden access to our vaccines in the world's poorest countries."

The aim of this AMC is to stimulate the late-stage development and manufacture of appropriate vaccines at affordable prices.

Through the AMC, donors commit money to guarantee the price of vaccines once they have been developed. These commitments help provide vaccine makers with the incentive to invest the considerable sums required to finalise development of vaccines and build adequate manufacturing capacity to serve developing countries.

"The AMC pilot will enable low income countries to access state of the art vaccines with assurance of affordable and sustainable supply in the future," said Nina Schwalbe, GAVI's Managing Director for Policy & Performance.

"We expect today's announcement will be an incentive to additional manufacturers, particularly those in developing countries, to accelerate production of new pneumococcal vaccines. This will further drive down price over time."

Firms can still make offers under the AMC as new calls for supply offers will be issued over time. In addition to GSK and Pfizer Inc., Panacea Biotec Ltd and the Serum Institute of India Ltd. are among the firms that have already registered to the programme and other companies have expressed interest in the pilot.

As more companies participate in the AMC, the long term vaccine price could drop further.

Committed to scale up capacity

To provide the new vaccines to countries, GSK and Pfizer Inc. have committed to scale up their manufacturing capacity to appropriate levels.

Before introduction can begin, the vaccines must be prequalified by the World Health Organization and approved by the AMC's Independent Assessment Committee (IAC) which is expected in 2010.

"Today's announcement is an important milestone in this innovative effort to bring affordable vaccines to the world's poorest. The World Bank will continue to work toward the success of this potentially life-saving program," said Susan McAdams, Director, Multilateral Trusteeship and Innovative Financing Department at the World Bank.

The introduction of the pneumococcal vaccine is part of GAVI's ambition to further impact child mortality rates globally. The Alliance also aims to introduce a vaccine against rotavirus, which causes diarrhoea, another major killer, in 41 countries by 2015.

Together, the introduction of the two vaccines could save the lives of up to 11 million children by 2030.

To fund the plan GAVI will tell a special meeting of its donors in The Hague later this week (March 25 - 26), that it needs an additional US$ 440 million per year to achieve its goal by 2015.

"Pneumococcal disease leads to nearly half a million unnecessary deaths among children in Africa each year", said Dr. Fred Were, National Chairman of the Kenya Paediatric Association. "This announcement is highly welcome. The access to suitable vaccines for African children is a matter of life and death."