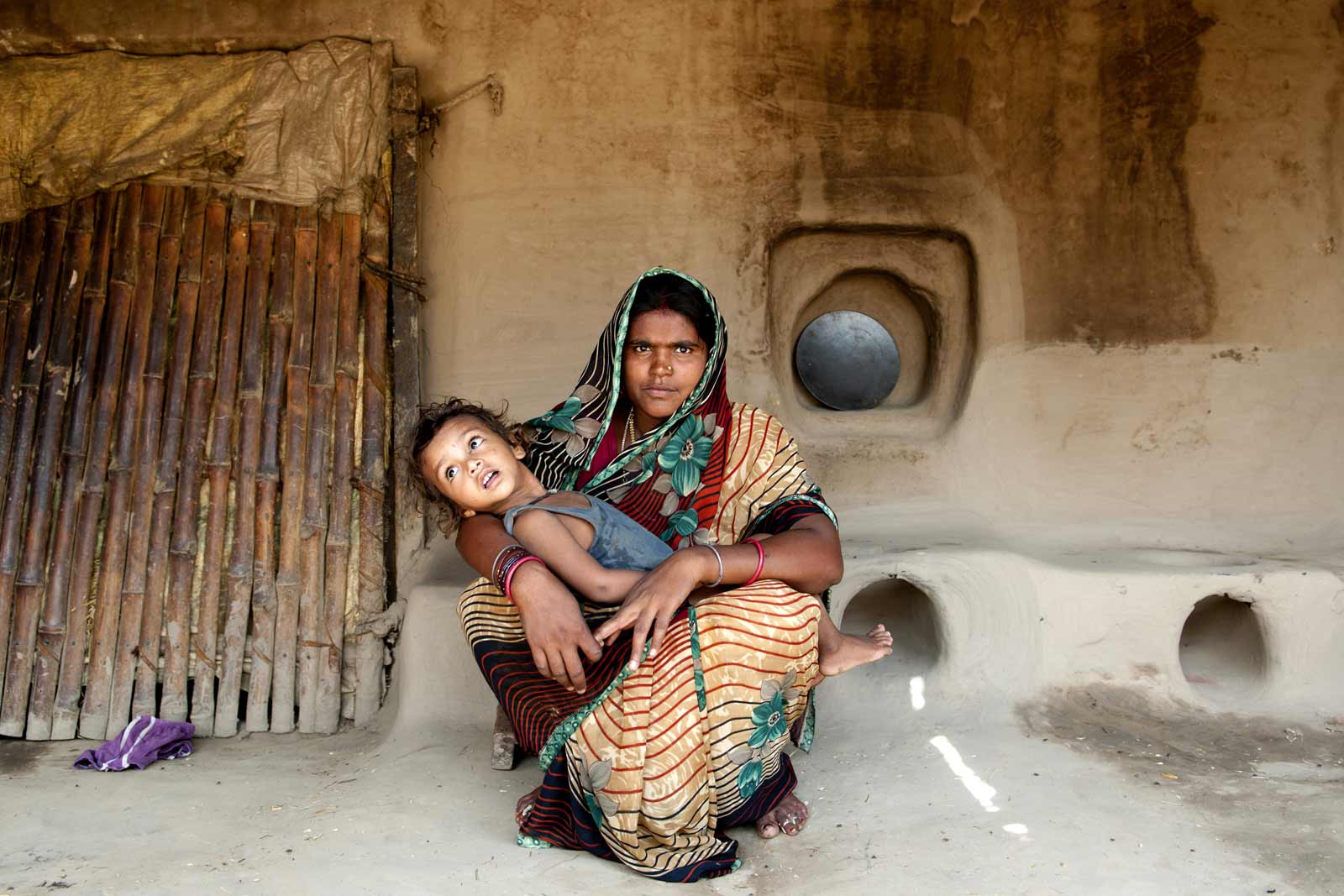 Working in pairs, they move swiftly through the crowded train as it rumbles across the bustling suburbs of New Delhi. Starting from opposite ends, the men deftly hop from carriage to carriage, checking passengers along the way, until at some point in the middle they meet.

In this way they can carry out a complete sweep of the train within just a few short stops, sometimes with the help of a third colleague to concentrate solely on the packed Lady Carriages, which despite their name seem to contain as many men as women.

But while they may wear the uniform of railway security staff these teams of exclusively male inspectors are not here to check tickets or catch fare dodgers. Instead, as they board each carriage, it is the infants and children they seek, looking for a telltale mark of indelible purple ink on the fingernail of the left hand, and administering an oral dose of polio vaccine – two drops into the child’s mouth – whenever they fail to find one.

Vaccinating children on moving trains may seem a little excessive, but it is precisely this kind of out-of-the-box thinking that is changing the fate of India, enabling it to go nearly three years without a single case of wild poliovirus. Now Bihar, once regarded as a failing state, is applying the same innovative principles to other vaccines and getting stunning results.

In less than a decade, Bihar has gone from a point where just 18% of its children were receiving all three diphtheria-tetanus-pertussis shots – a rate way too low to have a significant impact on mortality – to a routine immunisation coverage today of more than 85%. What’s more this is having a curious, synergistic effect, which is helping to further improve polio coverage at the same time.

The biggest transformation has come not from trains – which wouldn’t be safe for routine immunisation anyway since most of the vaccines require injections – but through other innovative, more targeted approaches.

By building on the national polio programme’s method of combining microplanning, monitoring, mobilisation and data analysis, state health officials, the World Health Organization (WHO) and UNICEF, have been able to create a huge and highly effective network that identifies problem areas or new disease trends in virtually real time.
Micro-planning enables a network of UNICEF-funded community “volunteers”, called Associated Social Health Activists (ASHAs), to keep track of who is in their community and which vaccines they have received, while implementing an immunisation plan tailored to the needs of each area, be it a village on the floodplains of the River Ganges or outreach to brick kiln workers.

Meanwhile, a separate team of monitoring staff carry out quality control and keep track of vaccine stocks, safe injection practices and the follow-up of children who missed doses.

Records for all this are kept meticulously up-to-date, which is then fed back upstream to government and WHO staff, who have the resources to analyse this huge amount of data. This in turn helps to improve management practices downstream by refining the quality of microplanning.

It is a virtuous vaccination circle -- one made even more effective through accountability at every single level of a system unafraid of self-analysis.

From microplans to macro improvements

In 2009, when staff compared polio microplans for Bihar with existing ones for routine immunisation, they discovered more than a quarter of the population was missing. In 2012, after a meticulous line-by-line comparison, staff added more than 50,000 transitional or high-risk people to routine immunisation microplans.
The turnaround has been remarkable. Not just because of Bihar’s huge population of 103 million people, with 2.8 million infants born every year, or its challenging landscape, with inaccessible mountainous regions in the north and flood plains to the south, but also because, like many Indian states, Bihar plays host to large numbers of hard-to-access migrant workers.

Some travel to Bihar from out-of-state, such as Budhani Kumari. Together with her two children, she spends seven months of the year working at the “Hunk” brick kiln, one of 93 in the Maner district, west of the state capital Patna. Each is a temporary home to around 200 people, nearly half of whom are children.

It’s backbreaking work, with each employee molding around 500 bricks a day. If it wasn’t for weekly onsite vaccination clinics, Budhani doubts she would find time to ensure her three children receive all their shots.

For Maya Devi and her two-and-a-half year old son Luvkush, it is more a question of access. Living in the village of Purani Panapur on a patchwork of water logged islands amidst the River Ganges, the only access is by rusty old pontoon bridges that buckle with the weight of passing vehicles. But when the rains come even these floating steel umbilicals are not long enough to reach dry land and then, she says, the only access is by boat.

How to catch moving targets

When it comes to immunisation, this combination of human migration and hard-to-reach settlements makes it difficult to prevent children slipping through the cracks. Vaccinating children on moving trains or running 24-hour drop-in vaccination clinics at stations are two examples of how to catch these moving targets.

Take Ishtiaq Ahmed, who rides a rickshaw in the Delhi suburb of Ghaziabad. His four-year-old daughter Alka received her polio vaccinations on a train during a trip to visit him with her mother and brother.

It is immunisation through innovation. The hope now is that if other states follow Bihar’s example, vaccination rates across India as a whole could rise too. Besides enabling the subcontinent to shed its reputation of being the nation with the largest number of unimmunised children in the world, if it can boost polio coverage too, then it might also help India finish the job and eradicate polio.

At a time when, with GAVI support, the government is preparing to launch the 5-in-1 pentavalent vaccine nationally, this is good news and a sign that India has turned a corner. With a birth cohort of 25 million, India has the largest population of unimmunised children in the world.

Despite its relative wealth, India still faces many immunisation challenges. However, through innovative approaches, such as immunising children on moving trains, in order to target migrant families, India has already made great progress towards eradicating polio, with no cases of wild poliovirus since January 2011. Now Bihar, a state with a large number of migrant and marginalised populations, has extended this innovation to routine immunisation and find solutions that are customised to each particular high risk challenge. This has enabled Bihar to go from a routine immunisation coverage of 18% less than a decade ago to a point where 85% of its children are immunised today. 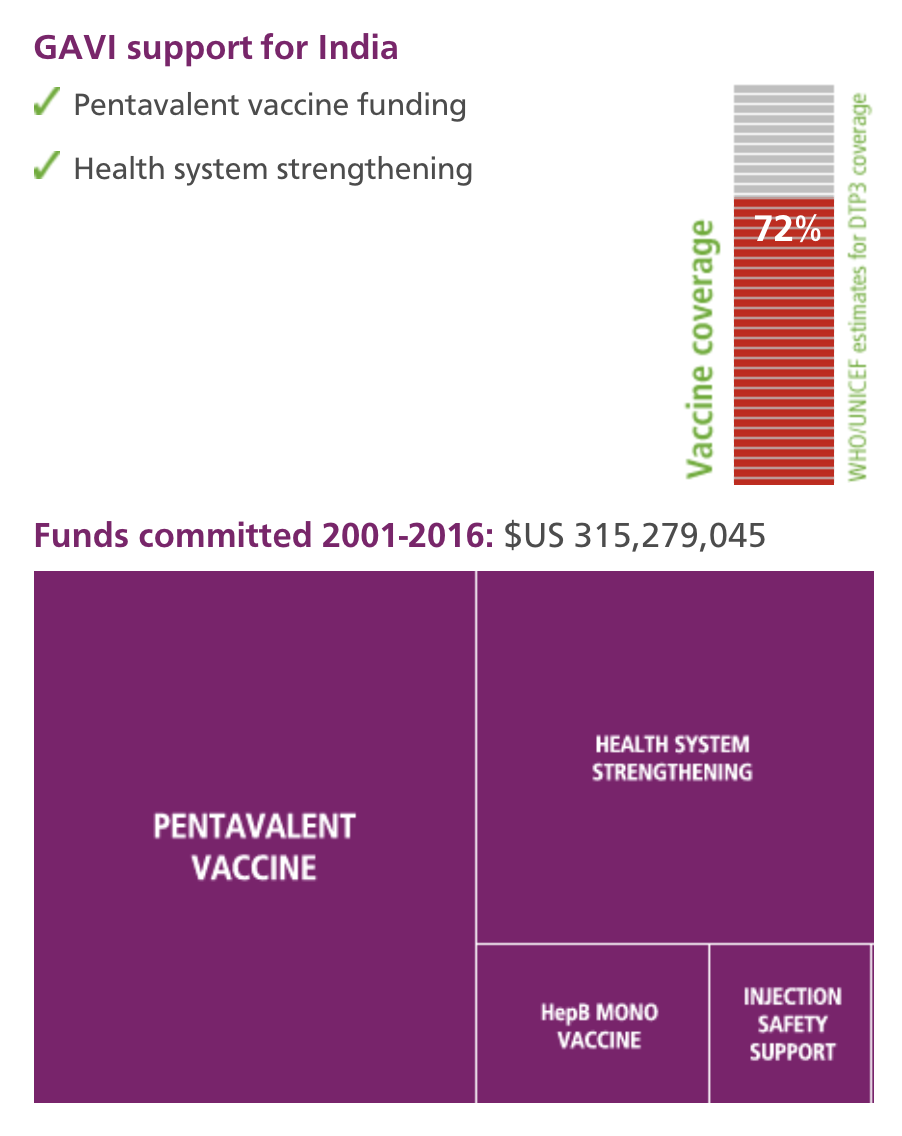 With a birth cohort of 25 million, India has the largest population of unimmunised children in the world.

Despite its relative wealth, India still faces many immunisation challenges. However, through innovative approaches, such as immunising children on moving trains, in order to target migrant families, India has already made great progress towards eradicating polio, with no cases of wild poliovirus since January 2011. Now Bihar, a state with a large number of migrant and marginalised populations, has extended this innovation to routine immunisation and find solutions that are customised to each particular high risk challenge. This has enabled Bihar to go from a routine immunisation coverage of 18% less than a decade ago to a point where 85% of its children are immunised today.

Tamil Nadu has recently boosted its routine vaccination coverage to 92% while slashing its vaccine wastage from 23% to 8% at the same time. Dr Pavana Murthy talks about two regional schemes that have helped to make this possible.

Q The state of Tamil Nadu has recently boosted its routine vaccination coverage to 92%, while slashing its vaccine wastage from 23% to 8% at the same time. How is this possible?

Dr Pavana Murthy: this is because of an effective state administration and a functional and robust public health cadre system within the state. There are also two state sponsored schemes namely the Computer based Pregnancy and Infant Cohort Monitoring Evaluation (PICME) and the Muthulaksmi Reddy Maternity Benefit Scheme (MRMBS), which provide financial assistance to mothers. These schemes promote better antenatal registration, safe deliveries and assist in improving immunization coverage.

Q How has this helped the Tamil Nadu immunisation coverage?

Dr Pavana Murthy: the Computer based Pregnancy and Infant Cohort Monitoring Evaluation (PICME) started in Tamil Nadu in April 2008. Under the scheme, all pregnant women are registered, tracked through pregnancy and its outcome.

Birth cohorts are followed up to one year of age including immunization. All pregnant women below poverty line are eligible for Muthulaksmi Reddy Maternity Benefit Scheme (MRMBS) financial assistance. These government assistance schemes target the most vulnerable who are likely to miss vaccinations. This ensures coverage of high risk groups within the state.

Q How much money do they receive and when?

Dr Pavana Murthy: currently, mothers who are the beneficiaries under the scheme would be paid in three equal instalments of INR 4000 (roughly US$64). The first is paid during antenatal registration and check-up. The second is paid after their infant is born, provided that the baby is delivered at a primary, secondary or a government health care institution. The third and last instalment is paid after the infant receives their third dose of pentavalent vaccine.

Q Other financial incentive schemes exist, why has this been so successful and besides boosting vaccination rates what other impact is this having?

Dr Pavana Murthy: the two schemes, PICME and MRMBS are empowering women and providing financial security particularly for vulnerable families at the low end of the socio-economic spectrum, both during pregnancy and after child birth.

Also it encourages women below the poverty line to give birth in government health facilities, which is not only safer for them but ensures that the infant gets all vaccinations. Since this scheme is applicable for the first two children, it promotes a small family norm within the state.

Q The computerised system requires mothers to set up bank accounts, what other role does it play?

Dr Pavana Murthy: yes, all financial assistance is given through the electronic clearance service and paid directly into individual bank accounts. PICME also ensures objective monitoring of vaccination coverage at state, district and sub-district level rather than relying on reporting of health workers alone. So it improves monitoring.

Q How does PICME work with your open vial policy to help to reduce wastage too?

Dr Pavana Murthy: Tamil Nadu has been practising an open vial policy since 2011, initially for pentavalent vaccines, but since May 2012 other vaccines have also been included as per the Government of India instructions. PICME generates lists of children eligible for vaccination, so health workers are able to plan immunization sessions effectively.

There is a good cold chain management system of vaccine at the state, district and primary healthcare centre level. There is also an effective double check register used for all vaccines, including those returned following immunization sessions. Partially used vials are stored separately with a label indicating the name of the vaccinator.

These vaccines are used subsequently by the same worker who will take care to plan their visits taking the number of doses required according to the number of infants on their due list. This ensures that partially used vials are reused before their expiration date, thereby minimizing vaccine wastage across the state.