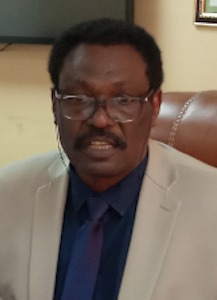 Mahamoud Youssouf Khayal was appointed Minister of Public Health, Chad on 11 August 2019. After completing his primary and secondary education, he continued his higher education at the University of Belarus where he graduated with a Master of Science degree in engineering, followed by a Ph.D. in Technical Sciences, both with honours. Upon his return to Chad, he first worked as a lecturer, then as an assistant professor and finally as professor at the Faculty of Physical Sciences of the University of Chad. He was Rector of the University Institute of Applied Technical Sciences from 1997 to 2013, and Rector of the Virtual University of N’Djamena after having been Director General of the National Center for Research Support from 2012 to 2018.

In 2016, Minister Khayal joined the African Peer Review Mechanism, an instrument established in 2003 by the African Union and whose mandate is to ensure that policies and practices of adhering states are consistent with the agreed political, economic and corporate governance values, including the private sector. In 2017, he was unanimously elected as Chair of the African Peer Review Mechanism after having been a panelist in charge of the Ivory Coast. Minister Khayal is a knight of the National Order of Chad.