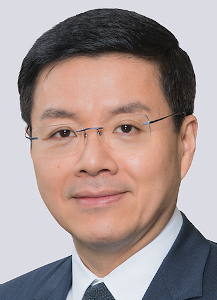 Yibing Wu joined Temasek in October 2013 as Head of China, also serving as the Joint Head of the Enterprise Development Group.

His professional background is a mix of management consultancy, operating senior executive, and investment. He received his Ph.D. in Biochemistry and Molecular Biology from Harvard in 1996, and went on to McKinsey, joining their Beijing office in the same year. He rose to become Senior Partner (Director) and Managing Partner of the Asia-Pacific M&A practice in 2004. During this time, he worked on several Chinese IPOs, including leading bank, insurance company, and telcos. In 2005 he was seconded to Lenovo and led the acquisition and integration of the IBM PC business, rising to Executive Vice-President and Managing Director of the parent company, Legend Holding in 2008.

He left in 2009 in order to co-found CITIC Private Equity Funds Management, a China-focused domestic private equity firm with more than US$ 13 billion in total assets under management. Whilst remaining as President at CITIC PE, in 2012, Dr Wu joined Goldstone Investment Company as Chairman and CEO for 18 months before moving to Temasek.