800,000 girls to be protected against disease following introduction of HPV vaccine 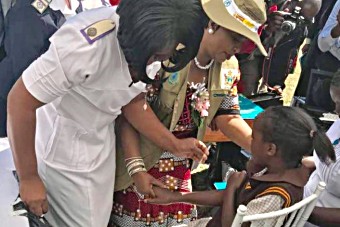 Geneva, 2 May 2018 – Girls across Zimbabwe will be protected against one of the country’s most deadly diseases following the introduction of Human Papillomavirus (HPV) vaccine into the country’s routine immunisation programme, First Lady of Zimbabwe Auxillia C. Mnangagwa announced today at a launch ceremony in Harare.

The vaccines, which will be funded by Gavi, the Vaccine Alliance and the Government of Zimbabwe, will reach over 800,000 girls aged between 10-14 years old across the country. UNICEF, WHO and partners will work alongside the Zimbabwe Ministry of Health on implementation.

“This is an important event for Zimbabwe for improving women’s health,” said Auxillia C. Mnangagwa, First Lady of Zimbabwe, speaking at the launch event. “Zimbabwe is highly burdened with cervical cancer and the mortality rate of 64% has to be reversed. Today we are dealing a blow against cervical cancer.”

According to the World Cancer Research Fund, Zimbabwe has the fifth highest burden of cervical cancer in the world. Over a thousand women die from the disease in the country every year, making it the most common cause of cancer in women in the country.

“Today is a historic day for girls and women across Zimbabwe,” said Dr Seth Berkley, CEO of Gavi, the Vaccine Alliance. “The introduction of this lifesaving vaccine will prevent thousands of women across the country from going through the unimaginable suffering caused by cervical cancer.”

Zimbabwe becomes the eighth African country to introduce HPV vaccine into its routine immunisation programme and the eighth worldwide to do so with Gavi support.

Cervical cancer is on track to overtake childbirth as the developing world’s biggest killer of women. It takes the lives of 266,000 women every year and this number is rising, with projections suggesting this figure could hit 416,000 by 2035 if we do nothing to tackle it.

This is a cancer that disproportionately affects the world’s poorest countries, with low and middle income countries accounting for 85% of all deaths. The five countries with the highest incidence of cervical cancer are all in sub-Saharan Africa – Malawi, Mozambique, Comoros, Zambia and Zimbabwe.

The vast majority of cervical cancer deaths are now preventable through safe and effective HPV vaccines. Gavi, the Vaccine Alliance began supporting the roll out of HPV vaccine to low and lower-middle income countries in 2013. Since then it has helped governments in 30 developing countries run demonstration projects, and is now supporting introduction into routine immunisation programmes.

The Vaccine Alliance has played a key role in increasing certainty of demand, stimulating competition among manufacturers and ensuring that a sufficient quantity of quality vaccines is available. In high-income countries the HPV vaccine can cost more than US$100 per dose. Through Gavi’s market-shaping work it has secured a supply of HPV vaccines for as low as US$4.50 per dose.