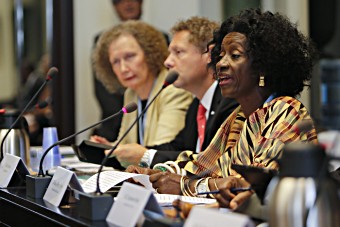 Geneva, 23 May 2014 - Developing countries have added their voice to calls for donors to back the GAVI Alliance’s plans to reach 300 million additional children with lifesaving vaccines between 2016 and 2020 during an event jointly hosted by the Government of Ghana and the GAVI Alliance at the 67th World Health Assembly.

Dr Hanny-Sherry Ayittey, Minister of Health Ghana, gave an overview of the country’s success in increasing vaccine coverage over the past three decades and added: “I am pleased to say that GAVI has supported Ghana to introduce these vaccines and we are very grateful for that.” On the economic impact of vaccines, Minister Ayittey added: “Healthier mothers and healthier children lead to economic benefits.”

H. E. Ousmane Koné, Minister of Health of Mali added his support for a fully funded Alliance as he highlighted Mali’s work to introduce more vaccines into the country’s routine schedule. 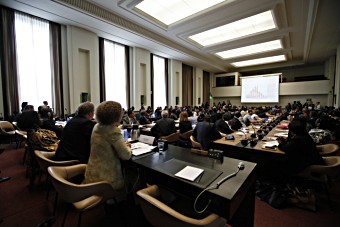 Interest in immunisation remains high at WHA - additionally fuelled this week by the 40th anniversary of the Expanded Programme on Immunisation and the launch of the GAVI Alliance replenishment - with more than 100 delegates squeezing into Salle VII at the Palais des Nations.

Dr Seth Berkley, CEO of the GAVI Alliance, shared some of the highlights from the replenishment kick off meeting, held in Brussels on May 20, which included an investment opportunity presented by GAVI to donors which could see 300 million additional children immunised, five to six million additional deaths averted and US$ 80-100 billion in economic potential unlocked. Ambassador Thomas Fitschen of Germany added that the country will host the final replenishment meeting. 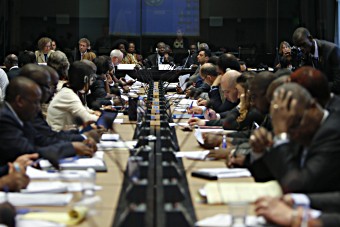 Delegates during the event jointly hosted by the Government of Ghana and the GAVI Alliance at the 67th World Health Assembly.
Credit: GAVI/2014/Evangelina Zoupanos.

Dr Berkley also shared updates on Alliance support for inactivated polio vaccine, HPV, sustainability and co-financing and gave a brief preview of the discussions that will be held at the GAVI Board meeting next month around the Alliance’s 2016-2020 strategy.

Following Dr Berkley’s update, ministers from Afghanistan, Angola, Moldova and Togo all intervened to call for GAVI Alliance-supported programmes to be fully funded for the 2016-2020 period to build on the individual and collective success that GAVI eligible countries have seen over the past 14 years.