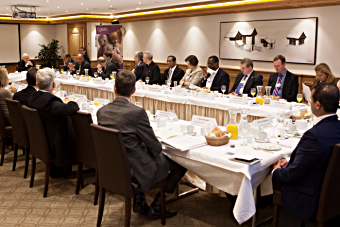 Davos, Switzerland, 25 January 2013 - The GAVI Alliance announced an additional US$ 25 million in matched pledges from three private organisations today at a CEO breakfast hosted by Bill Gates and the UK during the World Economic Forum. GAVI will use the funds to buy life-saving vaccines for the world’s poorest children.

The new commitments are being matched by the UK Government and the Bill & Melinda Gates Foundation through the Gavi Matching Fund, a funding initiative launched in 2011. Today’s pledges will bring the total amount raised to date under the fund to US$ 78 million.

The pledges were made by three partners:

The new commitments, totalling US$ 12.5 million, will be matched through the GAVI Matching Fund under which the UK Government’s Department for International Development (DFID) and the Bill & Melinda Gates Foundation match donations to GAVI made by private organisations, their employees and customers.

The GAVI Alliance is a Geneva-based public-private partnership aiming to improving health in the world’s poorest countries. Since its establishment in 2000, GAVI has financed the immunisation of more than 370 million children and prevented more than 5.5 million premature deaths.

Innovative way to reach all children with vaccines

“Vaccines work to save and improve lives, and are one of the most cost-effective investments we can make,” said Bill Gates. “The GAVI Matching Fund is an innovative way to help reach all children with the vaccines they need.”

DFID Secretary of State Justine Greening noted that “GAVI shows what can be achieved when world leaders and private enterprises work together to fight ill-health and disease across the developing world. I urge firms and foundations gathered at the World Economic Forum to take this chance to join the GAVI Matching Fund to deliver proven, measurable results.”

“These new pledges point to the power of public-private partnerships in helping immunise the world’s poorest children,” said GAVI Alliance Board Chair Dagfinn Høybråten. “The generous investments by our partners Comic Relief, LDS Charities and Vodafone bring not only critical funding, but also strong advocates for children’s immunisation who can bring significant visibility to this issue.”

“We’re delighted to be partnering with GAVI and, thanks to the generosity of the British public, hope to raise a significant amount of money and strengthen awareness of this important issue,” said Comic Relief CEO Kevin Cahill. “This year’s Red Nose Day campaign will feature the crucial role of immunisation in saving children’s lives in the world’s poorest countries.”

LDS Charities became a GAVI Matching Fund partner in June 2012, and its significantly increased commitment just six months later shows its devotion to the cause. Its members have spent tens of thousands of volunteer hours on child immunisation, such as arranging 1.5 million SMS messages to be sent during GAVI’s historic double rollout of vaccines in Ghana.

“It is an honour for us to partner with GAVI in the effort to save children’s lives and improve people’s health through immunisation,” said Fred Riley, manager of Immunizations and Special Projects for the Humanitarian Services division of LDS Charities. “The funds come from our members and demonstrate the priority the Church places on this good work.”