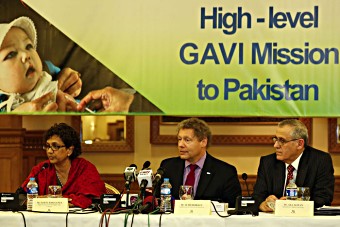 Islamabad, 19 February 2015 – Childhood immunisation in Pakistan is at a crossroads and strong political will is required to ensure that the lives of millions of children are not put at risk, three global health leaders warned today.

Almost three million children miss out on a full course of the most basic vaccines every year in Pakistan, leaving them vulnerable to life-threatening diseases. Immunisation coverage rates across the country vary widely with some districts seeing very few children protected against diseases such as diphtheria, pertussis, tetanus, measles and bacterial pneumonia.

A high-level mission including Dr Seth Berkley, CEO of Gavi, the Vaccine Alliance, Dr Ala Alwan, Regional Director for the Eastern Mediterranean region at the World Health Organization, and Dr Geeta Rao Gupta, Deputy Executive Director of UNICEF is meeting with leaders in Islamabad to set out their concerns and offer their support to Pakistan moving forwards.

We have delivered a strong message to leaders that we are ready to work with them to drastically improve this situation and strengthen routine immunisation across Pakistan.

“It is a tragedy when any child dies from a vaccine-preventable disease,” said Dr Berkley. “The lives of millions of children across Pakistan are at risk because of limited access to vaccines. We have delivered a strong message to leaders that we are ready to work with them to drastically improve this situation and strengthen routine immunisation across Pakistan.”

“Deaths among under five years children attributable to vaccine preventable diseases constitute up to 25% of the total deaths among this age group in developing countries, including Pakistan,” said Dr Ala Alwan, WHO Regional Director for the Eastern Mediterranean. “Pakistan is not on track for achieving MDG4 which aims at reducing child mortality by two thirds by 2015. Increasing routine vaccination coverage will significantly contribute to decreasing infant and child deaths and achieving MDG4.”

“The need to improve routine immunisation coverage in Pakistan cannot be overemphasised,” said Ms Geeta Rao Gupta, the Deputy Executive Director of UNICEF. “We realise the challenge Pakistan faces regarding immunisation and are determined to make 2015 a turning point for the country in terms of immunising all children, especially those living in marginalised communities and hard to reach areas. The fact that nearly 400,000 children under the age of five die in Pakistan every year from diseases which can be prevented through vaccine is simply not acceptable. These precious lives can and must be saved.”

Dr Ala Alwan, WHO Regional Director for the Eastern Mediterranean

The delegation will meet with Prime Minister of Pakistan, His Excellency Prime Minister Nawaz Sharif, to highlight the importance of political will in ensuring immunisation coverage rises across all regions and districts in Pakistan. There are wide regional variations in coverage across the country’s four main provinces with Punjab seeing a 76% coverage rate while in Baluchistan the rate is just 27%.

The delegation calls for stronger collaboration between the federal and provincial level to tackle the variations in vaccination coverage across the country. Accountability of the Expanded Program on Immunization (EPI) is seen as critical to increase access to routine immunisation as well as recruitment and training of qualified EPI personnel coupled with improved reporting systems.

We realise the challenge Pakistan faces regarding immunisation and are determined to make 2015 a turning point for the country in terms of immunising all children, especially those living in marginalised communities and hard to reach areas.

With Pakistan planning to introduce the inactivated polio vaccine (IPV) in the coming months, routine immunisation will be more important than ever as protection against polio is given to babies along with the antigens against other diseases. By the end of 2015, up to 73 Gavi-supported countries plan to have introduced IPV, which is seen as a key part of the Global Polio Eradication Initiative’s endgame strategic plan.

“Pakistan has a choice to make for its children,” added Dr Berkley. “Routine immunisation is the bedrock for access to vaccines against many illnesses, including polio, so by strengthening these systems Pakistan will be making an investment of political will which will benefit many generations to come.”