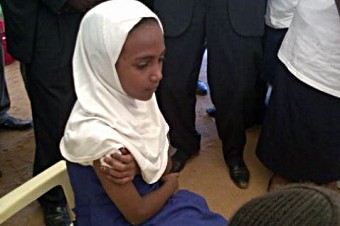 The first round of the HPV demonstration project took place at the Central Primary School in Kitui County in Eastern Kenya. The delivery of the HPV vaccines follows last week’s confirmation that GAVI has secured a record low price for the vaccines.

“This is an important moment for Kenyan women, as cervical cancer kills more Kenyan women than any other cancer,” said Dr Seth Berkley, CEO of the GAVI Alliance. “Working closely with partners WHO and UNICEF, GAVI’s support for HPV vaccines is bridging the gap between rich and poor countries, enabling HPV vaccines to reach girls no matter where they live.”

Kenya is the first of seven sub-Saharan countries to get GAVI’s support for HPV demonstration projects. Using a ‘learn by doing’ approach, the demonstration projects give countries the chance to explore ways to deliver HPV vaccines and to make informed decisions if they then choose to apply for national introduction. The wide reach of the immunisation programmes should also provide a valuable opportunity to reach adolescents with other important health interventions.

Working closely with partners WHO and UNICEF, GAVI’s support for HPV vaccines is bridging the gap between rich and poor countries, enabling HPV vaccines to reach girls no matter where they live.

In Kitui County, the HPV vaccination will be given to nearly 20,000 girls in primary schools. Both girls and boys will also be provided with health education on HPV and cervical cancer as well as on hygiene and hand washing.

In the second year of the demonstration project, other services may be integrated, including de-worming and iron supplementation, targeting both girls and boys.

The World Health Organization estimates that every year in Kenya more than half of the 2,500 women diagnosed with cervical cancer die from the disease. Cervical cancer is preventable through vaccination. It is also treatable if effective screening is in place.

Unless efforts are made to prevent and control the disease, the number of women dying from cervical cancer is estimated to double by 2025.

High enrollment rates among Kenyan girls, mean that most will receive the vaccines through schools. The project in Kitui County will also deliver HPV vaccines with the support of community health workers to out-of-school girls, who may be at higher risk, through local clinics and outreach campaigns.

The Kenyan Ministry of Health selected Kitui County for its good performance in routine immunisation and outreach campaigns.

The HPV demonstration project in Kenya will be followed in the coming months by seven others in Ghana, Lao PDR, Madagascar, Malawi, Niger, Sierra Leone and the United Republic of Tanzania. In 2014, GAVI will begin funding the HPV vaccine for the national programme in Rwanda, which was started with donated vaccines in 2011 as the first national rollout in Africa.

By 2020, GAVI expects more than 30 million girls in over 40 of the world’s poorest countries to have been immunised with the HPV vaccine.

Globally, a woman dies from cervical cancer every two minutes. Of the 275,000 women each year who lose their lives to cervical cancer, more than 85% live in developing countries where access to screening and treatment is often limited. Cervical cancer is a leading cause of cancer deaths among women in countries eligible for GAVI support.