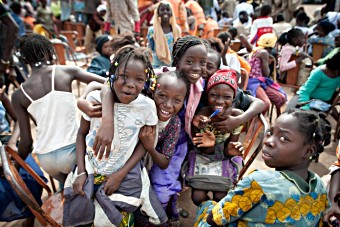 Dar Es Salaam,Tanzania, 6 December 2012 – The GAVI Alliance plans to work with countries to prepare them for nationwide roll outs of the vaccine against the human papillomavirus (HPV), the leading cause of cervical cancer. Pilot projects are expected to start in several developing countries as early as 2013 – the majority in sub-Saharan Africa. Countries will begin to pilot ways of providing the vaccine to protect girls aged 9 to 13 and demonstrate that they have the capacity and infrastructure to fully vaccinate girls nationwide.

“The demand for HPV vaccines has exceeded expectations and we are looking forward to supporting developing countries in introducing these vaccines to protect adolescent girls against cervical cancer,” said Dr Seth Berkley, GAVI CEO. “HPV vaccines are our best hope to protect millions of girls against this deadly disease.”

Rwanda is rolling out the HPV vaccine nationwide and Uganda has been conducting pilot projects through donations from vaccine manufacturers. By 2015, GAVI plans to immunise approximately one million girls with HPV vaccines and a large number of other countries are expected to run HPV pilot projects. By 2020, more than 30 million girls will be immunised against HPV with GAVI support.

“I am very happy to see that GAVI is investing in HPV vaccines and offering our African girls the same access to life-saving vaccines as girls in developed countries,” said Her Excellency Christine Kaseba, First Lady of Zambia and a leading advocate for women’s health. “Too many girls are robbed of their future by this cancer. I am personally committed to do what it takes to ensure that girls have access to HPV vaccines.”

Too many girls are robbed of their future by this cancer. I am personally committed to do what it takes to ensure that girls have access to HPV vaccines.

One of the challenges to effectively delivering HPV vaccines is that many developing countries do not offer routine preventative health services for girls in the 9 to 13 age group. Other challenges include identifying the appropriate target group and ensuring the right infrastructure is in place to reach adolescent girls. However, initial experience in offering HPV vaccinations in schools in Africa, Asia and Latin America has been encouraging.

“We applaud GAVI's historic commitment to make the HPV vaccine available in many sub-Saharan African countries in 2013 and for expanding access in coming years,” said Maria Blair, National Vice President of the American Cancer Society. “Making this life-saving vaccine more accessible and affordable presents an unprecedented opportunity to prevent the global threat of cervical cancer in the developing world, securing a brighter future for women and girls, who are the backbone of their families and communities.”

GAVI has been working with vaccine manufacturers to secure the most affordable price for HPV vaccines. To date, one manufacturer has announced an indicative price of USD 5.00 per dose, a 64% reduction in the current lowest public price. GAVI expects to announce a new price in early 2013.

“It is imperative that young women and girls in developing countries have access to the best healthcare possible, especially when it involves immunisation to protect against the most common cancer in women in our region,” said Vanessa Mdee - presenter of MTV Africa’s weekly show “MTV’s Base Select 10” - who has spoken out on girls’ health and HPV. “I'm happy that GAVI is investing in HPV vaccines for my sisters around the continent. This is a chance at a brighter future."

HPV vaccines can protect against 70 per cent of cervical cancer, and together with screening and treatment could prevent most cervical cancer. However, in developing countries where women often lack access to those services, vaccines are critical to prevention. Vaccination against HPV is only effective before the person is infected with the virus. Immunising girls before sexual initiation – and before exposure to HPV infection – is a key strategy to preventing cervical cancer.